Mickey Lamantia Stays True to Himself 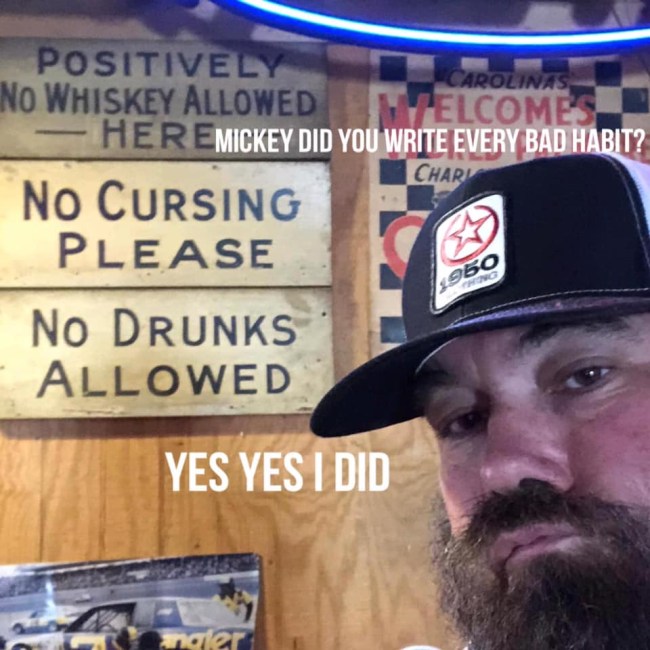 When I was a kid, I drove a 1977 Oldsmobile Vista Cruiser station wagon that only had an AM radio that got two channels – a talk station and a country station.

Thus, I listened to a lot of country radio growing up. But that was back when country radio was a different animal than it is today. There was no country rap (hick hop) like what we get from Florida Georgia Line or Sam Hunt, nor were there pop musicians trying to find new ways to make money by reaching new audiences.

Instead, I grew up on old line country music by the likes of George Jones, Willie Nelson, Merle Haggard, Waylon Jennings, Hank Williams, Jr., David Allan Coe and others.

One of my favorites – who for now has flown under the radar outside of outlaw country purists – is Mickey Lamantia (pronounced Luh-man-tee-uh). I was honored to have him on as my first guest on The Load Out Music Podcast earlier this year and it was a fascinating conversation.

“By 21, I had got discovered singing a Randy Travis song,” he told me from his home in Cranston, Rhode Island, “Next thing I know I’m opening up shows for Willie Nelson all around New England.”

Then, as he told me, “life took over,” and he began pursuing a career in law enforcement. That ultimately led to Lamantia becoming a prison guard, which he continues doing today when not playing music.

But some eight years ago, things took a turn. Lamantia began writing music again and has since produced a trove of outlaw country classics including 2016’s “Outlaw Life;” 2018’s “Every Bad Habit,” “Alcohol, Tobacco and Firearms,” and “Whiskey on My Breath;” and 2019’s “It Was A Long Time Ago” and “23rd Psalm.”

Recently, however, Lamantia turned the production dial up a notch.

“We had cut 24 songs last fall after deciding I needed more content,” he told me recently. “Instead of a single or double album, I thought, ‘why not four, six-song Eps and release one every three months and stay relevant for the entire year?’”

It’s a strategy that many musicians are turning to – dropping singles here and there to keep fans paying attention, connected and eager for more.

“Whereas a one-and-done can be forgotten until the next album, I think every song gets heard.” Lamantia added. “On a full-length album, I was noticing the songs on the end of the album were less played. This way we keep the fans happy.”

Earlier this year, he dropped Honky Tonk Confessions: Chapter One, which contained gems like “All by My Lonesome,” “Love Triangle” and “Another Chance” and was at one point the most streamed album on Spotify. Then, on the heels of that success, this month he fired off the equally impressive Honky Tonk Confessions: Chapter Two with soon-to-be outlaw classics like “One of Many” and “She’d Wanna Leave.”

“We had a story to tell and what better way to do in than in a series of chapters,” Lamantia said of the release process. “It’s a collection of songs that tells a story of country music and each song was placed with other songs for a reason. There’s so many things I’m proud of about these albums.”

On the Confessions albums, Lamantia collaborated with noted songwriters Buddy Cannon, Dean Dylan, Paul Overstreet, Jeff Bates and Joe Doyle. And in looking back at the evolution of his sound in terms of how these songs compare to his earlier hits – Lamantia sees a consistency of strong songwriting that continues a country music tradition.

“The songwriting is there, as are the stories,” he said. “The sound has been very consistent. This is what we strive for. I think the difference is that I have grown as an artist. I’m cutting other people’s songs that appeal to me and my style. But most of all I’m staying true to who I am.”