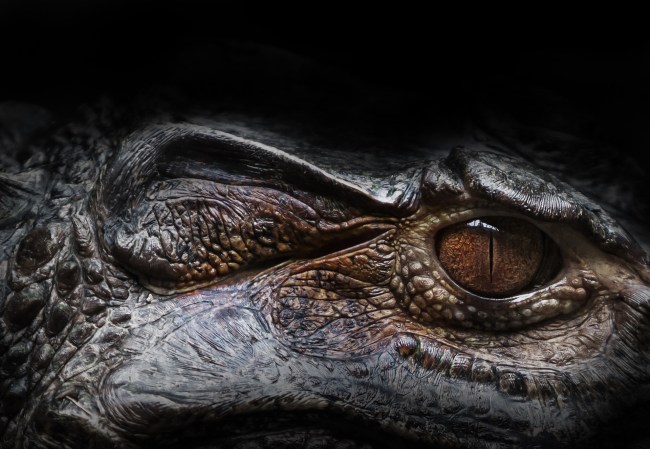 If you were to go deer hunting in Florida, Louisiana, Georgia, east Texas, or the Carolinas you probably wouldn’t be terribly shocked to come across an alligator in a pond. In fact, that might seem pretty normal. I live in Florida and I’ve got a small alligator of about 5-feet who lives in the lake across the street. This is normal. They’re everywhere. But coming across a live alligator in a Minnesota pond while hunting in November???? That would shock anyone.

Hunter Cory Klocek experienced many firsts during Minnesota’s Deer Opener weekend, according to the report in KARE 11. He went on his first shotgun hunt, his first hunt during the pandemic, and he saw the first live alligator in his lifetime. For context, this happened in Zimmerman, Minnesota which was unseasonably warm last weekend with ‘high’ temps up to the lower and mid-70s but it’s currently 26-degrees in Zimmerman with a ‘feels like’ temp of 23.

Obviously, he thought his eyes were playing tricks on him. Chasing a 10-point buck into a pond after bagging it with a shotgun only to find an alligator is the last thing a normal person would ever expect to happen. But this is 2020 and things are not normal.

[At] eight o’clock in the morning, I had a nice 10-point buck walk in,” Klocek described. “I was able to take the shot and saw where he ran, saw where he fell down. I wasn’t sure if he was down or just lost him in the grass.”

But as for Klocek’s other first… he’s hoping it’s also his last, at least here in Minnesota on his friend’s farm.

“As I was walking around the pond where this deer ran, I was tracking the deer, there was a three-foot alligator laying on the edge of the pond,” he said. “So I called [my friend] and just said, ‘hey, there’s an alligator in your pond back here,’ and she said, ‘what are you talking about?’ I said ‘yes, there’s a real live alligator.'”

“Holy cow, there’s an alligator out here!” he recalled saying. “That’s not something you should see in Minnesota ever. I traveled the world a lot with the military. I’ve never been to a place where I’ve seen an alligator in real life so it was even more of a shock. In November in Minnesota, to find an alligator swimming in a pond.” (via KARE 11)

Here’s Klocek with his 10-point buck AND the alligator:

According to KARE 11, it’s ‘not completely rare’ for a Minnesotan to find an alligator. They are invasive species. Presumably, people keep them as pets until the gators get too big or they grow tired of the pet and release them into the wild.

Once they realized it was a living, breathing alligator in the Minnesota pond they phoned the Minnesota Department of Natural Resources and asked them how to proceed. The MDNR told them since the alligator is an invasive species he was allowed to go ahead and hunt the gator since it wouldn’t survive the winter anyway.

That is the story of how Klocek ended up with a 10-point buck (albeit, now that’s been a buried lead) and a presumed alligator in his freezer. When he pulled the alligator out of the cooler he had temporarily stored it in, the gator quickly frosted over as his garage was warm.

He said he is going to take both the animals to be taxidermized pretty soon.

Klocek added that although this made for one heck of a hunting season opener story, he was slightly upset to find that this most likely happened because of irresponsibility on the owner of the alligator.

“If it was someone’s pet and they brought it back there, they would have had to trespass on the farmer’s property to get it there,” Klocek said. “That’s frustrating. It’s frustrating that a pet owner wasn’t responsible enough to take care of their pet and released it. I understand accidents happen and if something happened and it got out–but I haven’t heard any reports of missing alligators.” (via KARE 11)

The Minnesota Department of Natural Resources said it’s not illegal for a person in the state of Minnesota to own an alligator or caiman but some cities have individual rules pertaining to exotic pets. Obviously, reptiles aren’t suited to survive in Minnesota’s weather. Lake Superior keeps the area pretty cool in Summer and comparatively warmer to nearby states in the Winter but it’s still frigid and snowy, not a climate that an alligator can survive in obviously.

Maybe it’s because I grew up in Florida but I’ve never known a single person to keep an alligator as a pet. Snakes, lizards, and frogs? Sure. But I cannot recall a person in my life who has ever kept a gator.