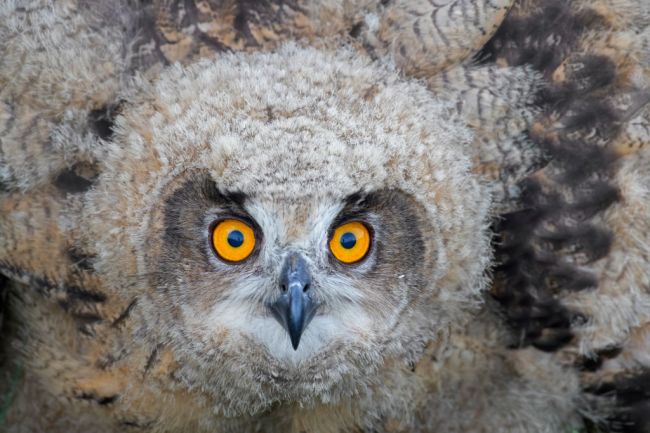 Gladys the owl escaped from the Minnesota Zoo earlier this month and officials need your assistance in locating her. The 5-year-old Eurasian eagle owl got loose in early October during a standard training and exercise session.

After being let out to stretch her wings (which can reach 6.5 feet across), Gladys decided to stay up in the trees. She hung around in the area for a few days and after multiple attempts to bring her back, she vanished.

Eurasian eagle owls can reach up to 2.5 feet tall and weigh up to 10 pounds. They are a predatory species and one of the largest in the world.

Officials believe that the owl is either somewhere else in the 485-acre zoo or beyond the zoo borders in the Apple Valley area, a suburb of Minneapolis. The zoo reminded the public that while Gladys is loose, she poses no threat to people.

Gladys does not pose a threat to public safety & we are proactively working with local wildlife agencies and authorities to assist in the search. If you spot a bird that looks like the included photo of Gladys, please contact your local police department. pic.twitter.com/5D5wP084zP

As for how to identify Gladys, it should be pretty simple. She is huge.

The zoo’s Director of Animal Collections said that she would stand out because “she’s going to be the largest owl you’ve ever seen.”

Local residents have reported sightings, Ring video footage containing owl calls and other information to the zoo. One person shared a photo that was taken on October 8th of an owl that bears resemblance to Gladys.

The owl can be seen clutching a white-bellied animal. Some believe that it looks like a cat, but the zoo replied saying that it is likely a rabbit.

The zoo also said that the owl shares a lot of Gladys’ characteristics and that it is sending a search team to investigate the area.