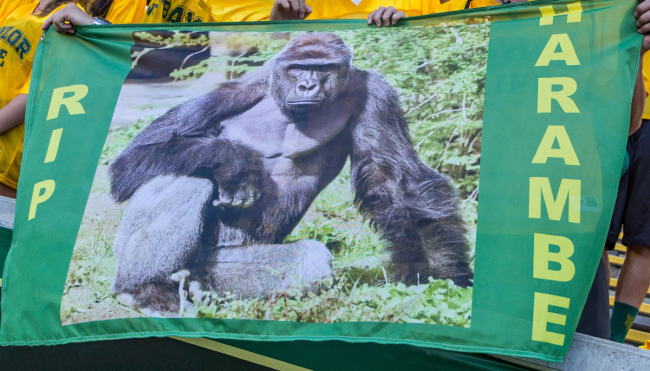 We’re just a few days away from the 5th anniversary of an incredibly tragic event that is arguably the millennial equivalent of the assassination of John F. Kennedy; the kind of sudden and shocking incident that anyone who had a MySpace page can likely remember exactly where they were when they heard about it.

I’m talking, of course, about the death of Harambe.

On May 28th, 2016, the glorious specimen of a silverback was minding his own business inside his pad at the Cincinnati Zoo when he was understandably startled by a small child who waltzed in like he owned the place. While Ohio law dictates residents are legally allowed to defend their homes, that statute apparently doesn’t apply to gorillas, as Haramabe was slain in cold blood by the zookeepers that served as the judge, jury, and executioner on that fateful day.

Thankfully, the internet quickly assembled in a quest for justice. After a video of the incident began to make the rounds, Harambe transformed into a martyr before transcending to the Astral Meme Plane. By the time everything was said and done, he’d leapfrogged Koko as the most beloved member of his species to ever roam the Earth he was taken from far too soon.

Harambe was murdered just one day before he would’ve celebrated his 17th birthday—an occasion that a Washington Nationals minor league affiliate recently commemorated (although it appears the team got some bad info concerning his date of birth.)

TONIGHT we honor the legacy of Harambe the gorilla and celebrate what would have been his 22nd birthday at the ballpark! 🦍🎉

The first 1,000 fans in the gates will receive a FREE Harambe Beer Stein, sponsored by @6bgbrewingco pic.twitter.com/PDZxrC0hEm

Tonight our players are wearing custom Harambe jerseys as our ultimate tribute to our sweet prince pic.twitter.com/0q3CKiy1PI

After rocking those custom jerseys to honor Harambe over the weekend, the Low-A Fredericksburg Nationals had their players sign the threads before putting them up for auction.

Do it for Harambe. Do it to @protectgorillas. But also do it because we think they’re the coolest jerseys ever. pic.twitter.com/pWBDEGywdg

As of this writing,  you’ll have to shell out a minimum of $140 if you want to get your hands on a jersey before the bidding closes on May 30th. If you need some motivation, all proceeds will benefit the Dutch Gorilla Foundation, but I’d argue you can’t really put a value on priceless art like this.