Mitch McConnell Is Getting Clowned For His Buffoonish Concern Over $1,400 Stimulus Checks 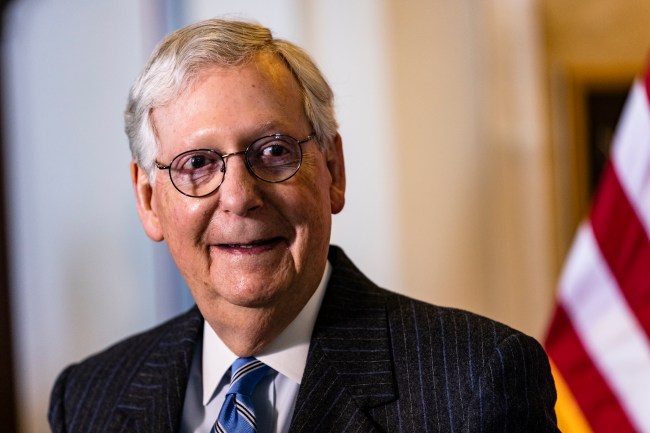 Can you imagine receiving a check for one month’s rent and putting in your two weeks notice the moment it hits your checking? No? That’s because you’re not a fucking idiot.

Senate Minority Leader and Prehistoric Reptile Mitch McConnell, a man who twice has attempted to slash stimulus proposals to their bare bones at the expense of The People, is fully back on his bullshit.

As the number of Americans applying for unemployment benefits climbed to a cartoonish 745,000 and the nation burdened with 10 million fewer jobs than it did in February 2020, McConnell is worried that if Americans receive the $1,400 stimulus check, they will refuse to go back to a job that maybe does not exist to begin with.

In an interview with Fox News, the 79-year-old worried that President Biden’s $1.9 trillion economic relief bill would prevent “some people from wanting to work.”

Who knew $1400 was retirement money? https://t.co/DdNOAEpuFk

“There is a concern about making it more advantageous to stay home rather than going back to work,” the Republican leader said. “If we could do it all over again, we—meaning Republicans—may offer an alternative that we think fits the situation. And it’s considerably less than $1.9 trillion. Five, maybe $600 billion, which is still an enormous amount of money.”

i would literally retire if i got my hands on 1400 dollars https://t.co/JH0JIdrKfj

Does he think our rent is like 5$ a month or something? https://t.co/W7tTuAxRo4

He's literally admitting they keep us poor to exploit us https://t.co/frtiOLoBLs

$1400 is like three tanks of gas and a Jersey Mike’s sub you turkey necked adult diaper wearing asshole. https://t.co/okR3LNPOP2

Your regular reminder that @LeaderMcConnell makes $193,500 a year, and the Senate is usually only in session, at most, 200 days a year.

Okay, sure, a lot of the days they aren't in session are weekends.

But that still gives them, at a minimum, two months "off" a year. https://t.co/ooUfxqsFhc

That bitch gotta be refurbished for that price.

That man has no lips and real life turtle neck he would say some shit like that. https://t.co/HcsqvQnS3l

bitch what am i gone do for the rest of fuckin year with $1400? https://t.co/IWPHDeyAKK

Biden recently agreed to a lower income threshold for stimulus checks that phases out individuals who earn more than $80,000 per year entirely.