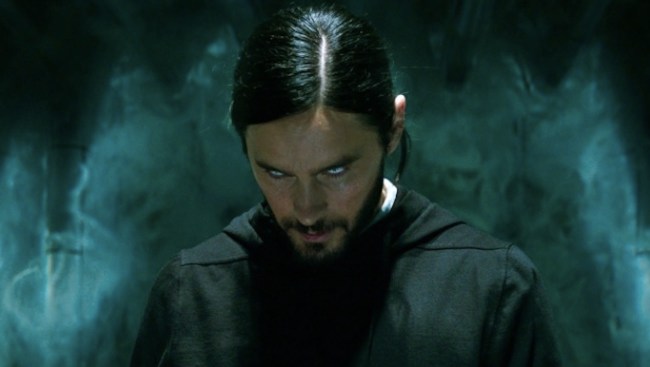 Similar to an actual vampire, just when you thought they were dead and buried, it turns out they’re alive and better than ever. That is fittingly the case when it comes to Morbius, the 2022 “Marvel” film about Michael Morbius — a doctor turned vampire — played by none other than Jared Leto.

In case you somehow missed out on Morbius-mania this past spring, the long-story-short version is that Sony’s Morbius was reviled by both critics and fans alike, as the film holds a 15% critics score on Rotten Tomatoes and struggled to crack $160 million at the global box office (which is very bad for a tentpole superhero film).

The flip side of that coin, though, is that Morbius *was* so bad that it immediately entered “so-bad-it’s-good” territory to such an extent that the film became one of the biggest memes of the year. Such a massive meme, in fact, that it hilariously convinced Sony to rerelease the film in theaters, which resulted in just another $300K.

And just when it seemed like Morbius-madness was finally beginning to fade away, the film and the consciousness around it roared back in a major way, as the movie is now available to stream on Netflix (in the United States), which could *potentially* lead to its biggest audience yet.

The reason that Morbius has found itself on Netflix so soon is due to a deal that Sony Pictures struck with Netflix last year that will see Netflix be the streaming home of Sony films following their theatrical runs. For example, Tom Holland and Mark Wahlberg-starring Uncharted is currently on Netflix, as are Sony catalog films like the Tobey Maguire Spider-Man trilogy.

Naturally, upon hearing the news of Morbius’ arrival on Netflix, cinematic connoisseurs across the land hopped on Twitter to celebrate this glorious day.

If you start Morbius at 1:34 PM on Saturday, Jared Leto will yell “It’s Morbin’ Time!” exactly as Spencer Petras completes a 3-yard pass on 3rd & 7 https://t.co/fQ9Leenr64

I think I’ll but Netflix again only for Morbius https://t.co/0tu06rIymF

Thats it. The day of reckoning has arrived. https://t.co/4mGxsY7Adh

They brought the morb to Netflix https://t.co/WJYze7dBJ4

The greatest film of our generation is finally on Netflix! https://t.co/w0tL6PpvDa pic.twitter.com/vQoivGFPQP