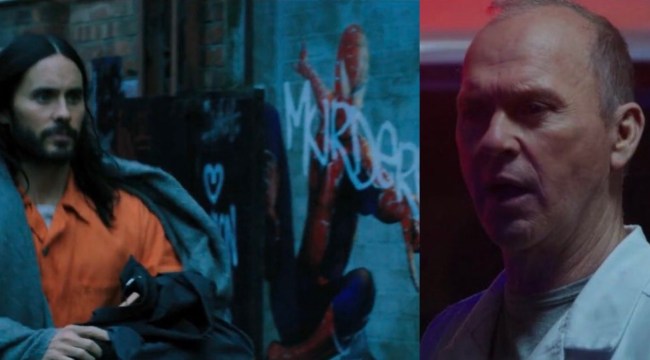 While we all knew that Sony’s Spider-Man universe would begin to bridge into the Marvel Cinematic Universe ever since the two struck a fresh deal over the character’s usage last summer, the manner in which they’ve done so seems to have everyone wildly confused, beginning with what appears to be an image of the Spider-Man from the original, early 2000’s trilogy in the first trailer for Morbius.

Naturally, this sent the internet into mass confusion, as Morbius was supposed to crossover with Tom Holland’s Spider-Man and not Tobey Maguire’s decade-old version. But because the internet is filled with detectives, it was quickly deduced that it was simply a laziness error on Sony’s part, as they used an image of Spider-Man from the recent PS4 video game.

So, there’s that — Sony just being Sony. Remember now, these are the dudes who got hacked by North Korea. The street don’t forget. But then, at the tail end of the trailer, a more tangible connection to the MCU is made when Michael Keaton’s character from Spider-Man: Homecoming, Adrian Toomes aka Vulture, appears.

Vulture is in the Morbius trailer, which pretty much confirms its connected to the MCU… 🤯 pic.twitter.com/hj4oVrVlOT

Ok, this is the Vulture. 👀 #Morbius pic.twitter.com/29hPKP7INw

Which, naturally, led to some incredible memes:

Kevin Feige when he saw Michael Keaton in the Morbius trailer: pic.twitter.com/juuTOoTU6N

Sony: #Morbius is not part of the MCU.

Also Sony: Here's Michael Keaton as Vulture in our trailer, remember him? He was Vulture, you know from Spiderman Homecoming.

So, what does this all mean? Well, on a macro level, it officially connects Sony’s Spider-Man Universe (or whatever the fuck it’s called, who knows, honestly) with the MCU, which will allow characters to bounce back and forth between the two franchises. Then, on a micro-level, it all but guarantees that Spider-Man will make some sort of appearance in Venom 2 (likely in a post-credit scene cameo) as the two universes are now intrinsically and narratively connected.

With Carnage (played by Woody Harrelson) set to make his debut in Venom 2 — which set to be released later this year — having two of Spider-Man’s most iconic villains running around beating the symbiotic shit out of each other without Spidey himself popping up can only sustain itself for so long.

Now, whether or not these characters will be appearing in Marvel Cinematic Universe films is another story entirely and a question we likely won’t have answered until the next Spider-Man film is released sometime in 2022. Considering how Spider-Man: Far From Home ended, it’s certainly a possibility that we see tons of iconic Spider-Man enemies, Morbius possibly included, in the franchise’s upcoming third entry.