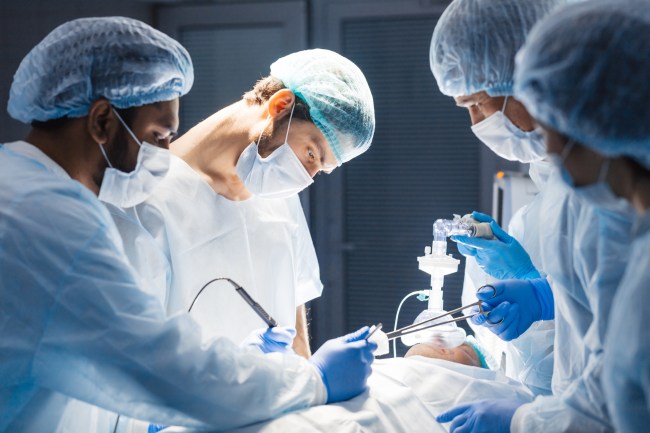 We often forget that surgeons are just people too—flawed and susceptible to the many misfortunes of existence. Sure, the dimwitted throes of civil society like to paint these medical professionals out to be more-human-than-human, capable of rebuilding the sick, decrepit, and nearly dead and giving them a few more years of misery than their bodies ever intended. It’s the reason that everybody’s surgeon is the best. Ever notice that? “Oh, so, Dr. Onyaknees Van Deepdickens is removing that lump from the monocled inferior-interior of your aorta-complex superior pre-post? Ah, you’ll be fine. He’s the best there is.” But these men and women are merely flesh and blood.

Surgeons are capable of screwing the pooch, just like the rest of us. This is why they are typically surrounded by an entire team of lackeys, machine readers, drink getters, sweat wipers, and, presumably, even someone to hold a urine jug. Hospitals want to give patients the best chance of surviving the knife in case the surgeon stumbles into the operating room disheveled to all be damned. After all, nobody wants to go in to have their tonsils removed and wake up dead.

I’m not saying that every surgeon makes it a habit of showing up to work hungover or on the come down from a long weekend of snorting coke off a hardbody harem of sawbones groupies. Even though that’s precisely what I would do at every opportunity if I raked in anywhere close to $500,000 per year. Maybe that’s why I have a DUI instead of a PH.D. Nevertheless, mistakes happen in the operating room, and sometimes the surgeon even fumbles enough to hurt someone.

In fact, a new study finds that there is one day out of the entire year that these Leatherfaced medicine men are more likely to botch a surgery than any other time. It’s the one day where it doesn’t matter if a patient is simply going in for routine surgery or to have a quarter pounder bypass supreme. On this day, in particular, death walks beside the surgeon.

And that’s on their birthday.

Researchers from the University of California, Los Angeles, found that surgeons are more likely to kill a patient on the anniversary of their birth. It’s shocking but seemingly true. After examining some 980,876 procedures conducted by nearly 50,000 surgeons, the study authors concluded that surgical doctors memorializing that magical time when they were shot out of the great poon porthole in the sky ran a substantially higher risk of leaving behind a corpse and a malpractice lawsuit.

“Among Medicare beneficiaries who underwent common emergency surgeries, those who received surgery on the surgeon’s birthday experienced higher mortality compared with patients who underwent surgery on other days,” researchers wrote in a study published in the BMJ. “These findings suggest that surgeons might be distracted by life events that are not directly related to work.”

Distractions in the operating room are nothing new. Unless a surgeon has spent time with Tibetan monks and learned some hippy-dippy methods for removing one’s self from the tragedies of life, well, then, a surgeon has the same problems as we do. They are just as incompetent, too. In fact, a 2015 study found that while surgeons were supposed to be in the operating room saving lives, they were on their cell phones instead. Yep, Dr. Deepdickens might be the best there is when it comes to removing cylindrical meats from tight orifices, but that fool might be texting his old lady when he should be trying not to clip someone’s intestines with the scalpel.

Listen, cell phones in the operating room just spell disaster. There’s always a chance that the staff will snap photos of a patient’s schlong while they are under the gas and share them on an online forum that pokes fun of the less endowed. Furthermore, doctors could always get some unsavory news before making the first incision. Imagine being on the verge of having a penile implant when, all of a sudden, the surgeon learns through Facebook that his gardener has been trimming his wife’s bushes. Medical degree or not, somebody’s leaving the hospital without a dick!

Last year, Johns Hopkins University School of Medicine’s John Makary found that around 1 million patients are injured every year in the operating room because a surgeon gets distracted by something. Most of these oops moments were because doctors can’t seem to disconnect from their cell phones. Still, what is it about having a birthday that’s so distracting that it puts a patient’s life more at risk than any other day? Researchers say the birthday factor was just a way to quantify the data. It’s not necessarily that turning a year older is causing the distraction. It could be something else. Still, it wouldn’t hurt to ask for the surgeon’s birthday the next time you go in for a procedure.