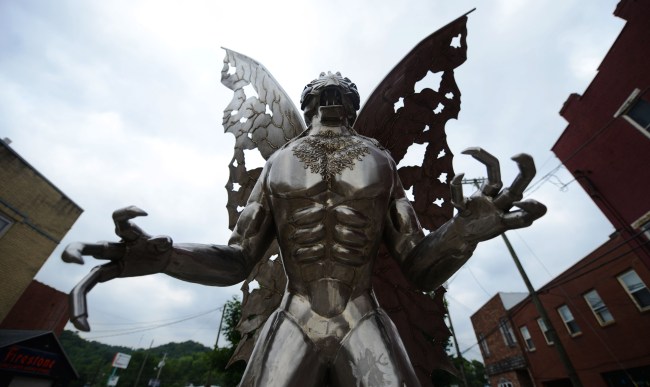 If you are unfamiliar with the tale of the Mothman, that’s okay. It just means that aren’t from West Virginia, haven’t seen the 2002 film or read the book The Mothman Prophecies, or haven’t played Fallout 76 recently.

As far as urban legends go though, the Mothman is actually a pretty good one.

Ground zero for the story and home of the Annual Mothman Festival and Mothman Museum is Point Pleasant, West Virginia, where, supposedly, from November 15, 1966, to December 15, 1967 the Mothman was seen repeatedly by people who definitely hadn’t been drinking too much moonshine.

It all began when two couples were driving along and saw a “large flying man with ten-foot wings.” Just days later, two volunteer firemen saw it and said it was a “large bird with red eyes.” Several other people also reported seeing the Mothman during this time.

On December 15, 1967, 46 people were killed when the Silver Bridge that connects Point Pleasant to Gallipolis, Ohio collapsed. Two of the victims were never found and naturally, this catastrophic event was blamed on the Mothman by many locals.

According to the book The Baby Train and Other Lusty Urban Legends, folklorist Jan Harold Brunvand claims the Mothman has also been associated with UFOs, attacking the roofs of parked cars occupied by teenagers, and a military storage site which people believe was the Mothman’s “home.”

The Mothman was also purportedly spotted prior to the 1999 Russian apartment bombings in the cities of Buynaksk, Moscow and Volgodonsk, and there were a reported 55 sightings of Mothman in Chicago in 2017.

Which brings us to today’s story.

On September 24, a 17-year employee of the United States Postal Service, working at Chicago’s O’Hare International Airport, claims she had an encounter with “some kind of very, very large bird…almost 7 feet tall.”

The woman, who asked to remain anonymous, told her story to UFO Clearinghouse.

I had just left work at the USPS Sorting Facility at O’Hare Airport at about 11:00 P.M. on Thursday the 24th of September and was walking out to my car when I saw something standing at the far end of the parking where I usually park . At first I thought it was a very tall person with a long coat. As I got closer to my car, I unlocked my car, which caused my headlights to come on. My headlights hit the person standing about 20-25 feet from my car causing it to turn and look right at me.

I saw that this was not some person but some red eyed and what appeared to be a coat were actually wings which it spread out as it turned to look at me. At first I thought it was some kind of very, very large bird but I’ve never seen any bird that stood almost 7 feet tall. I’m 5’4 and this thing looked taller than me by at least 2 feet. This thing then started making some type of chirping sound, almost a half chirp and half click like someone was clicking their tongue but much much faster. It then made some type of screeching sound and took off running toward me, it got to within 10 feet of me and took off into the air and flew above me.

I was screaming hysterically as I crouched down behind cars open door and I dived into my car headfirst. I was in a near panic as I tried to start the car, close and lock the doors and turn on my interior lights. I started my car and took off out of the parking lot and flew down the road till I hit the main road. I got home and told my husband who also works at the same facility and he was the one who told me about the sightings of this thing. I was scared shitless and hope I never see this thing again. This thing is roaming around the area, scaring people half to death, I hope the airport people decide to do something about this thing someday.

This is not the first time the Mothman has been spotted around O’Hare International Airport. From September to November of 2019, at least three people claimed to have seen the Mothman near O’Hare. One was a person parked outside O’Hare, another was a man who was attending a wedding three miles away at the Edward Hotel in Rosemont, and then a truck driver claimed to have seen the Mothman as he was picking up a load near O’Hare.