Mouthwash Cancels Out Key Benefits Of Exercise According To New Study 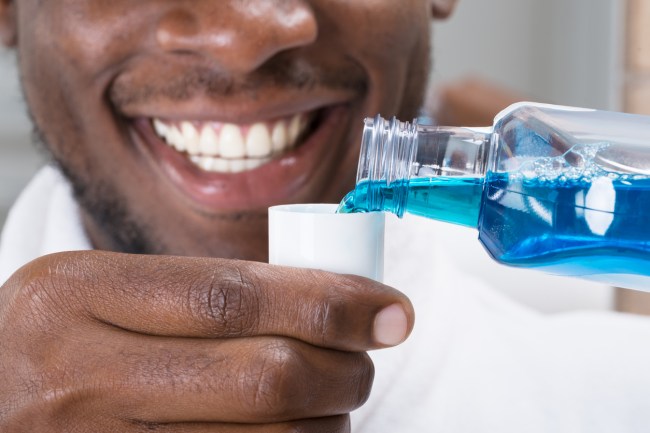 Are you trying to get those gains at the gym? According to a new study, don’t use mouthwash after your workouts because it will waste those gains. Good news for those of you who don’t maintain a healthy oral hygiene routine but workout excessively.

A new study from the University of Plymouth in the United Kingdom published in Free Radical Biology and Medicine finds that mouthwash has a negative effect on exercise. The scientific study discovered that your mouthwash prevents the key benefits of exercise associated with lowering your blood pressure. Sorry, for the stank breath, I’m trying to get ripped.

The study examined 23 healthy adults for the study, which is a very small sample size. The participants ran on a treadmill for 30 minutes in the experiment. After their workout, the participants rinsed their mouths with either an antibacterial mouthwash or a mint-flavored placebo immediately after the exercise as well as 30, 60 and 90 minutes after the workout sesh.

The participants also had their blood pressure monitored for two hours after exercising. When the people took mouthwash instead of the placebo, their blood pressure wasn’t as low as those who had taken the placebo. Researchers believe that the antibacterial mouthwash drastically reduced mouth bacteria’s ability to produce nitrite, which led to lower levels of nitrite in the participants’ saliva and blood.

Mouth bacteria consume nitrate and process it into a chemical called “nitrite,” which is absorbed into the body when we swallow saliva. Some gets turned back into nitric oxide, which gets into the bloodstream and helps lower blood pressure. Nitric oxide increases the diameter of blood vessels and increases blood flow circulation to active muscles.

“Research over the last decade has shown that nitrate can be absorbed in the salivary glands and excreted with saliva in the mouth,” explains physiology specialist and study author Raul Bescos from Plymouth University. “Some species of bacteria in the mouth can use nitrate and convert into nitrite – a very important molecule that can enhance the production of nitric oxide in the body.”

“This is the first evidence showing that the nitrate-reducing activity of oral bacteria is a key mechanism to induce the acute cardiovascular response to exercise during the recovery period in healthy individuals,” the authors wrote in the paper.

RELATED: New Study Reveals What Energy Drinks Do To Your Heart And There Are Some Alarming Discoveries

“These findings show that nitrite synthesis by oral bacteria is hugely important in kick-starting how our bodies react to exercise over the first period of recovery, promoting lower blood pressure and greater muscle oxygenation,” said nutritionist Craig Cutler, who worked on the study. “In effect, it’s like oral bacteria are the ‘key’ to opening up the blood vessels. If they are removed, nitrite can’t be produced and the vessels remain in their current state.”

“This study shows for the first time that this oral nitrate/nitrite pathway is a key element on the cardiovascular benefits of exercise,” said Bescos.

The study also theorizes that people with high blood pressure might also be more at risk for gum disease, which could affect their oral microbiome. More research is needed to determine how much mouth bacteria affects the rest of the body.

So embrace your stank-ass breath and get those healthy gains.

RELATED: FDA Says Sunscreen Enters Your Bloodstream After One Day Of Use Which Could Be Hazardous To Your Health