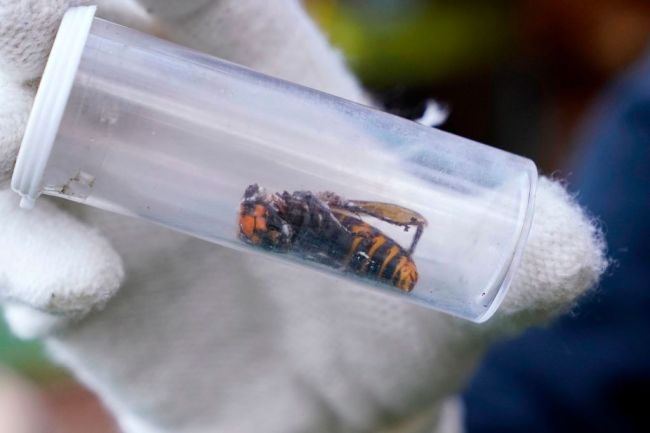 A nest of Asian giant hornets – better known to the world as “murder hornets” was discovered this past week in Washington state.

The Washington Department of Agriculture said in a release that authorities first found the nest on October 22, in Blaine, Washington.

After staff members caught and tagged three of the murder hornets, one lead them back to the massive nest.

According to the Washington Invasive Species Council, the hornet is an “invasive species from Asia and a known predator of honeybees.” Honeybees are critical to pollinating crops.

The Department of Agriculture released photos over the weekend showing crew members – covered in thick bodysuits and face shields for protection – vacuuming the hornets out of a tree into giant canisters.

Got ‘em. Vacuumed out several #AsianGiantHornets from a tree cavity near Blaine this morning. Further details will be provided at a press conference on Monday. Staff not available for interviews before then. pic.twitter.com/31kgAUuJd0

“While Asian giant hornets normally nest in the ground, they are occasionally found nesting in dead trees,” the department said. “Dozens of the hornets were seen entering and exiting the tree while the WSDA team was present.”

According to the Associated Press, the hornets “pose a threat with six-millimeter-long stingers, which can sting nearby animals or humans, and can also spit venom.”

The first Asian murder hornet was identified back in December 2019 in Washington but the first hornet wasn’t trapped until July.

The Associated Press spoke to scientists who explained the tree will be cut down but officials still suspect more nests in the area so the search will continue.