Mysterious Black Sarcophagus Opened Despite Fears Doing So Would End The World, But Contents Are Scary 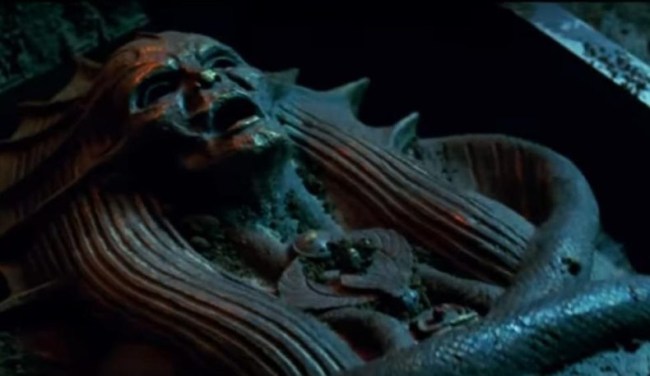 Full Disclosure: The above photo is not the actual black sarcophagus in question but rather the black sarcophagus from The Mummy movie from 2017 starring Tom Cruise. For all intents and purposes, this is still a sarcophagus and Getty images can be pricey, but we’ll have some actual images of the real sarcophagus later in the article. A 2000-year-old massive black granite sarcophagus was discovered and many believe that opening the relic would unleash an apocalyptic curse. So far so good, but the contents were pretty gruesome never-the-less.

We take you to Alexandria, Egypt where a mysterious black sarcophagus was found three weeks ago. The ancient coffin is from the early Ptolemaic period, which started in 323 BC after the death of Alexander the Great. Many believed that the tomb contained the remains of ancient Greek leader Alexander the Great, while others believed that the 27-ton sarcophagus contained a catastrophic curse that would end the world. There’s no way to know for sure until you open it, right? Right.

The archaeologists opened the sarcophagus that was buried 16-feet underground to uncover a carved alabaster head and three skeletons bathing in a red liquid, thought to be nasty sewage water. The huge coffin did release a curse of a putrid smell and forced the excavation team to flee from the puke-inducing stench.

The skeletons are believed to be that of three military members, including one who suffered a wound from an arrow (no word on if he used to be an adventurer or if he took an arrow in the knee). “The initial preview of bone structures suggests that they are most likely to belong to three officers or military soldiers,” the Egyptian Ministry of Antiquities said in a Facebook post.

The stinky sarcophagus skeletons will be transferred to the Museum of Alexandria for further analysis. Thankfully, no army of half-man half-lion warriors has arisen and no portal opening to another dimension has been activated. “We’ve opened it and, thank God, the world has not fallen into darkness,” said Mostafa Waziri, secretary-general of the Supreme Council of Antiquities. Yet. It’s only been a day.