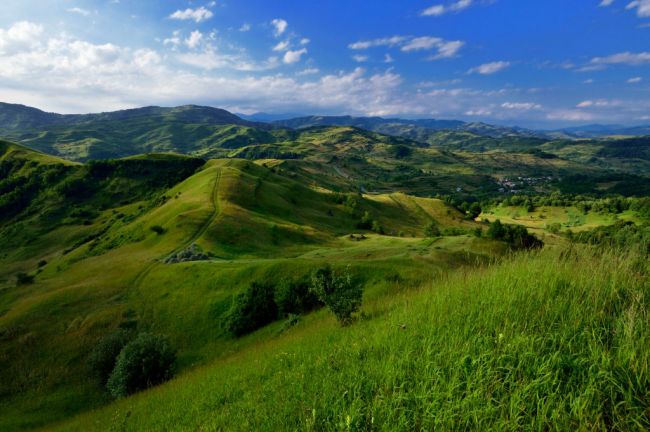 The mysterious monolith that was discovered in Utah vanished. Days later, a monolith appeared in northeast Romania. Now that monolith has disappeared. Will the company doing this as a guerrilla marketing scheme, please knock the crap off, we’re getting tired of it.

Another metal monolith is spotted, this time in Romania pic.twitter.com/K4BkfoVKSX

“A shiny metal monolith vanished on Tuesday from Romania’s mountainous Neamt county,” according to Reuters. The silver monolith in Romania, which appeared much like the one in Utah, disappeared four days after being erected. If your erection lasts for more than four days, please consult a physician. The poorly-welded monolith had been standing on the Doamnei Hill in the city of Piatra Neamţ, near the ancient Petrodava Dacian Fortress. Now it’s gone.

“The 2.8 metre (9ft) tall structure disappeared overnight as quietly as it was erected last week,” Robert Iosub, a journalist for the Ziar Piatra Neamt local newspaper, told Reuters. “An unidentified person, apparently a bad local welder, made it … now all that remains is just a small hole covered by rocky soil.”

Georgiana Mosu, a spokeswoman for the Piatra Neamt Police Department, said officers had been conducting an investigation into the illegally-installed structure because it was situated in a protected archaeological area.

There’s an update on the alien-like monolith that was discovered in a remote desert in Utah. A photographer claimed that four men dismantled the mysterious monolith and took off with it. Ross Bernards alleges that he drove six hours from Colorado to Utah to take photos of the bizarre edifice on Friday.

“I had just finished taking some photos of the monolith under the moonlight and was taking a break, thinking about settings I needed to change for my last battery of drone flight when we heard some voices coming up the canyon,” Bernard wrote on Instagram. “4 guys rounded the corner and 2 of them walked forward.”

“They gave a couple of pushes on the monolith and one of them said ‘You better have got your pictures.’ He then gave it a big push, and it went over, leaning to one side,” the photographer claims. “He yelled back to his other friends that they didn’t need the tools.”

“The other guy with him at the monolith then said ‘this is why you don’t leave trash in the desert.’ Then all four of them came up and pushed it almost to the ground on one side, before they decided push it back the other when it then popped out and landed on the ground with a loud bang,” he said. “They quickly broke it apart and as they were carrying to the wheelbarrow that they had brought one of them looked back at us all and said ‘Leave no trace.’ That was at 8:48.”

Ross said the reason why he didn’t stop the men from tearing down the monolith was because there were “at least 70 different cars in and out,” and “permanently altering the untouched landscape.” He added, “Mother Nature is an artist, it’s best to leave the art in the wild to her.”

If this is a viral marketing campaign for a new Shawn Mendes album, people will be pissed. Speaking of piss…adventurers Riccardo Marino and Sierra Van Meter went to visit the monolith on Friday night, and said they “passed a truck that was hauling a large object strapped down In the bed with the hatch open.” They alleged that the monolith was gone when they arrived, and “all that was left in its place was a message written in the dirt that said ‘bye b*tch’ with a fresh pee stain right next to it.” While the world is expecting an alien invasion, all we’re really going to get is a puddle of urine. This is how 2020 treats us.