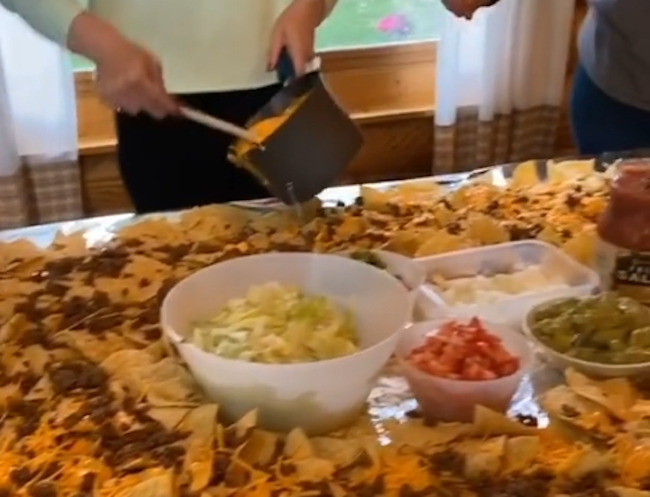 In the time of Corona, sharing food with people seems like a no-no, but this family just doesn’t give a crap because vacations call for nachos tables.

Posted to TikTok by a user named Stefanie, the clip shows her family’s evening meal — a massive and communal “nacho table.”

“We always make a nacho table during family vacation,” Stefanie captioned her video.

To prepare the nacho feast, Stefanie and the fam spreads out large sheets of aluminum foil over the dining room table.

The table is coated with chips, meat, cheese, and basically anything that would go on nachos. The less popular (healthier) food items are put into bowls in the middle of the table.

I’ll be honest, I cringed slightly when the kid used her hands to spread out the chips, but I’m going to hope her parents helped her wash her hands first.

TikTok users were torn on the idea and more than a few said they’d give it a shot at the next family gathering. Many, many commentators found the idea gross, unsanitary, and a massive waste of food.

“The people leaning over the food while they eat and using the other food as a plate would make me too paranoid to eat it,” said one commenter.

I’d be willing to give the nacho table a shot but I’m enforcing a few rules before mealtime.

My nacho table rules would include:

Would you give this a shot at your house?