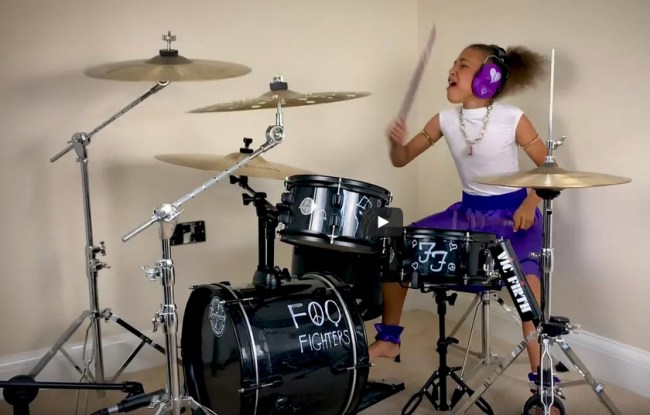 Nandi Bushell is a 10-year-old musical prodigy. This fact becomes evident just a few seconds into any of her amazing videos.

Bushnell is already somewhat of a star. On an appearance on Ellen in 2019, Bushell explained how she became fascinated with the drums at 4 years old.

“On Saturdays and Sundays, [my family and I] make pancakes, and I listen to The Beatles, and I saw the drum kit and Ringo Starr,” Bushell said. “He just inspired me to play the drums, because I loved seeing him playing the drums.”

The Ipswich, England, native dreams of one day jamming with the Foo Fighters.

“My dream is to one day jam with Dave Grohl, Taylor Hawkins and all the @Foo Fighters! Mr Grohl I would love to have a drum battle with you! I LOVE Everlong it’s really hard to play as it’s so fast but so much FUN!!!”

Let this cover of “Everlong” stand as her audition.