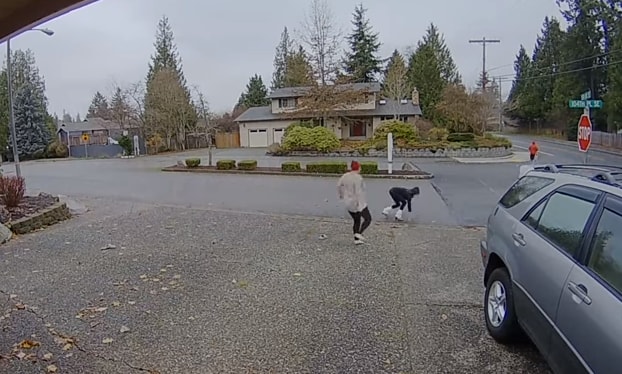 Tis that time of the year again when your fellow man shows compassion to one another in the spirit of humanity. Tis also that time of year when porch pirates steal your precious Christmas presents right the fuck off your property. Word to the wise, don’t try stealing packages from this home because their nanny will chase you down. A Washington state woman went well beyond her job requirements and paygrade as she caught a thief red-handed as she attempted to steal a box from the house.

Kate Anderson was babysitting a 1-year-old baby when she spotted a woman steal a package from the front door area of the home. That’s when Kate jumped into action and ran out the door to chase after the thief. The woman got the package in the car, but the getaway driver was so spooked that they took off without their criminal accomplice in the vehicle. Anderson then made a citizen’s arrest on the woman and held her for eight minutes until police arrived at the scene of the crime. I know nothing about children, but I surmise that 1 -year-olds are not very self-sufficient and probably shouldn’t be left alone to their own baby devices.

“I continued to run and like ‘Hey, you’re not a nice person! I see you, and you’re stealing from me and when [she] was on the ground, I kind of kept her there,” she told Q13 FOX. “If someone is doing something wrong, I’m not afraid to put them in check.”

The entire incident was captured on a Ring surveillance camera at the home, which was only installed a few weeks ago. The Snohomish County Sheriff’s Office said the suspect’s name is Rhieanna Schindler. She had outstanding warrants for drug possession and theft, and has been arrested more than 20 times since 2010.

Anderson’s last day working for the homeowner was Friday, but her employer Tanya Smith said she may need to bring her back but in a different capacity more fitting of Kate’s particular set of skills. “Maybe we’ll just have to keep Kate as our bouncer — keeping our packages and belongings safe all the time,” Smith said. We really need to go all Se7en here and ask, “What’s in the box?” Like if it was a box of socks that probably wasn’t wise to leave a 1-year-old baby alone for 10 minutes, but if it was a GoPro HERO6 then the lil tike can hold it down for a few mins.