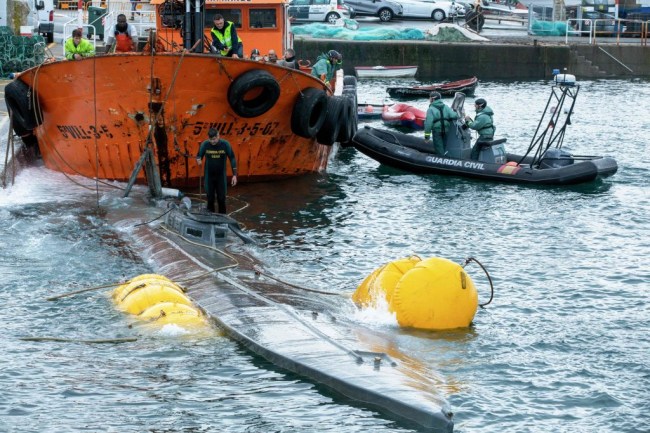 There is a drug kingpin out there today is not a happy camper after a huge narco submarine was captured by authorities. Not only did some drug lord lose a drug sub, but also lost the three tons of cocaine that was on the vessel.

A total of 240 agents from Spain’s Guardia Civil, National Police, and Customs Service raided and seized a 65-foot narco submarine off the Spanish coast this week. The drug sub was carrying 152 bundles of cocaine weighing three tons and said to be worth $110 million.

#SubTuesday is naturally a narco #Submarines. The Galicia #Spain one should be raised soon. It will be like this one, only larger and more impressive. Expect extensive analysis, and need to finish the narco sub book to. Various ref material https://t.co/GLenPvJ6lf pic.twitter.com/crzGsCK4U7

The vessel was captured off the northwestern region of Galicia on Saturday. Officials believe that this is the first narco sub to ever have been found in Europe.

The narco submarine attempted to transfer the drugs to a boat, but poor weather conditions prevented the exchange.

“Conditions at sea meant that the semi-submersible wasn’t able to deliver the drugs to a second vessel,” Spanish officials said in a statement. “Its crew members then headed towards the coast, where they scuttled and abandoned the vessel. The maneuver was detected by a Guardia Civil patrol using night-vision goggles, who then noted the boat’s arrival point and the subsequent fleeing of its crew.”

The submersible craft was brought ashore for further inspection. Two people from the sub were arrested; they are Ecuadorian nationals. A third member of the crew was able to escape.

“This is a historic operation, which will mark a before and after,” government official Javier Losada de Azpiazu told reporters. There were reports that the submarine originated from South America, but Losada de Azpiazu said police were not positive as to where the sub came from.

He added that the operation received intel from agencies from Britain, Brazil, Portugal, and the United States. Spanish authorities received a tip that a “suspicious vessel loaded with cocaine” was headed to Spain.

Authorities in Spain have seized a "narco sub" carrying more than 6,000 pounds of cocaine, worth about $110 million; two people were arrested. pic.twitter.com/oTFMU2OhEN

Cartels have been caught trafficking drugs from Latin America to the United States on several occasions, but this is the first in Europe, which is thousands of miles away.

In July, a video of the U.S. Coast Guard chasing and raiding a self-propelled semi-submersible suspected drug smuggling vessel (SPSS) in the Pacific Ocean went viral.

This video from Motherboard details how Comubian drug cartels have started using submersibles for their drug trafficking and how they build them.