NASA Preparing For ‘Colossal God Of Chaos’ Asteroid To Arrive In 10 Years, Elon Musk Says ‘We Have No Defense’ 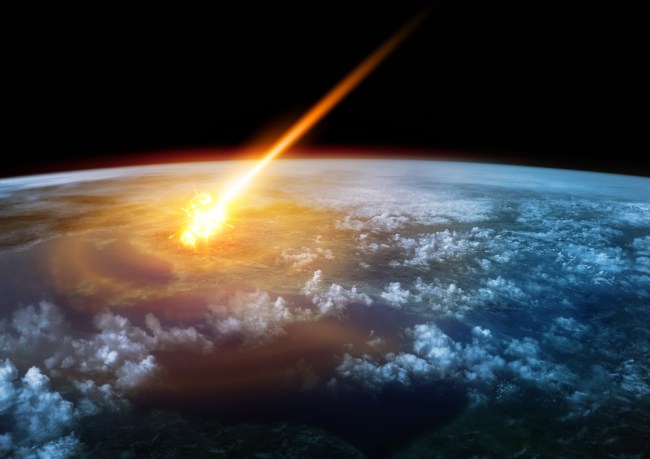 NASA is preparing for a gargantuan asteroid that is barreling towards our neighborhood in the next 10 years. Elon Musk warns that “we have no defense.” It looks like you had better change your 10-year plan to a 5-year plan.

NASA is already making preparations for a very special intergalactic visitor that will flyby Earth in 10 years. The monstrous Apophis asteroid has a very scary name: “The Colossal God of Chaos Asteroid.” That space rock sounds like a problem.

The doomsday rock is nearly 1,500-feet long and captured the attention of Joe Rogan, who tweeted out a news article about the potentially world-ending asteroid.

Asteroid shock: NASA preparing for ‘colossal God of Chaos’ rock to arrive in next 10 yearshttps://t.co/dEu6XiUrqg

SpaceX founder Elon Musk replied to Joe Rogan’s tweet and said: “Great name! Wouldn’t worry about this particular one, but a big rock will hit Earth eventually & we currently have no defense.”

Thankfully the giant asteroid is not supposed to crash into Earth and cause every living thing to go extinct. The massive asteroid that is travelling at almost 25,000 MPH is expected to fly within 19,000 miles above Earth’s surface on April 13, 2029. For reference, most satellites in Earth’s orbit are orbit 22,236 miles from the planet. NASA noted that it is extremely rare for an asteroid of this magnificent size to get so close to Earth.

NASA is keeping a close eye on The Colossal God of Chaos Asteroid, known as 99942 Apophis to scientists. NASA believes that the asteroid will “cruise harmlessly by Earth,” but there still is a 1-in-2.3-million chance that it collides with our planet. If the Colossal God of Chaos Asteroid did smash into Earth, it would be a world-killer, and the impact would have the force of 15,000 nuclear weapons detonating simultaneously. That is why the Apophis asteroid is named after Apep, the Egyptian god of evil, chaos and destruction who dwelled in eternal darkness.

The Colossal God of Chaos Asteroid will visit Earth again in 2036, but Apophis is not projected to collide into our world. Never-the-less, Apophis has been categorized as a Potentially Hazardous Asteroid (PHA) because of its size and proximity to Earth. The killer asteroid’s close proximity to Earth could change the way Apophis spins and there could be small avalanches.

Musk is absolutely correct that humans currently have no defense for an asteroid on a collision course with Earth. NASA has said that they plan to use the Apophis flyby to prepare our planetary defenses, which we really don’t have anything in place yet.

“By observing Apophis during its 2029 flyby, we will gain important scientific knowledge that could one day be used for planetary defense,” said Paul Chodas, director of CNEOS.

NASA is teaming up with Musk’s SpaceX to attempt the first-ever mission to redirect an asteroid. The $69 million (nice) program called the “Double Asteroid Redirection Test (DART) mission, will attempt to change the trajectory of asteroid 65803 Didymos sometime in June of 2021 by utilizing SpaceX Falcon 9 rockets.

“The first-ever mission to demonstrate the capability to deflect an asteroid by colliding a spacecraft with it at high-speed — a technique known as a kinetic impactor,” according to a statement from NASA.

NASA said they have detected 1,803 potentially hazardous asteroids. However, none of the known PHAs is on a collision course with Earth. NASA warns that there are 1-in-100,000 chances of an asteroid collision with Earth.

NASA has started the Near-Earth Object (NEO) website, the space agency’s center for “computing asteroid and comet orbits and their odds of Earth impact.” There are more than 18,000 NEOs.

Hopefully, Elon Musk goes back on Joe Rogan’s podcast, gets lit up and talks about asteroids before a space rock obliterates all of us. Maybe even divulge some government space secrets. You can read more about asteroids HERE.

RELATED: Mysterious Massive Anomaly 5 Times Bigger Than Hawaii Discovered On The Moon And Scientists Don’t Know What It Is