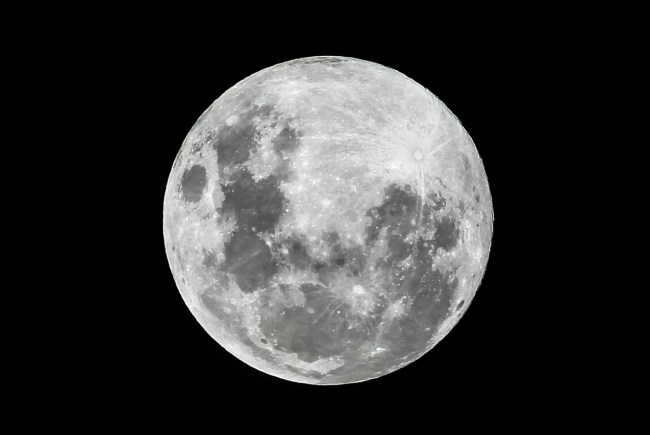 There is something extremely heavy on the moon. The massive anomaly is gargantuan and scientists don’t know for sure what it is. I’m not saying it’s aliens, but…

Researchers at Baylor University in Texas discovered the bewildering anomaly because whatever lies beneath the surface of the moon actually altered the gravity of the area. The scientists were measuring the strength of gravity around the moon and one specific area was extremely dense.

In their paper, published in Geophysical Research Letters, the scientists also utilized topographic information taken from the Lunar Reconnaissance Orbiter.

The team’s research point to a huge mass that is at least 180 miles beneath the moon’s surface. The unknown material in the massive anomaly is so heavy that it pulls down on the moon’s surface and affects gravity in the area.

“When we combined that with lunar topography data from the Lunar Reconnaissance Orbiter, we discovered the unexpectedly large amount of mass hundreds of miles underneath the South Pole-Aitken basin,” the study’s lead author Dr. Peter James said. The mass anomaly is weighing the basin floor downward by more than half a mile according to James.

This color-coded map from NASA displays the topography of the far side of the moon, specifically the South Pole-Aitken (SPA) basin. The warmer the colors the higher topography and the shades of blue colors indicate a very low topography. 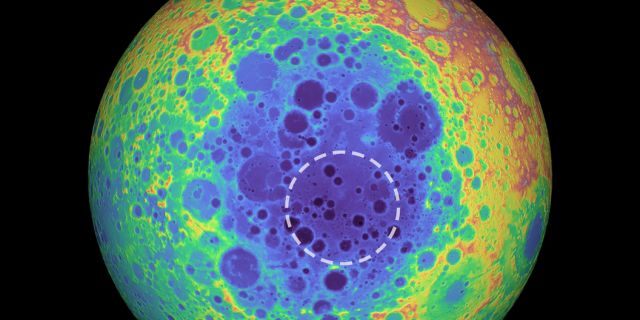 James called the basin “one of the best natural laboratories for studying catastrophic impact events, an ancient process that shaped all of the rocky planets and moons we see today.”

While scientists don’t have a definitive answer as to why it is so heavy around this area, they have several theories. Unfortunately, a space station is not one of them.

“One of the explanations of this extra mass is that the metal from the asteroid that formed this crater is still embedded in the Moon’s mantle,” James said.

Computer simulations found that under the right conditions, a large asteroid with an iron-nickel core of an asteroid may have smashed into the moon and created the crater. The asteroid went so deep that it deposited the iron-nickel into the moon’s upper mantle, which is the layer between the crust and core.

“We did the math and showed that a sufficiently dispersed core of the asteroid that made the impact could remain suspended in the Moon’s mantle until the present day, rather than sinking to the Moon’s core,” James said.

“Imagine taking a pile of metal five times larger than the Big Island of Hawaii and burying it underground,” James explained. “That’s roughly how much unexpected mass we detected.”

Another scientific hypothesis for the unexpected mass is that there is a concentration of dense metals that were compiled following the last stage of lunar magma ocean solidification billions of years ago.

Know what another possibility is? An alien base. What if someone is building a Death Star from the inside-out of the moon?