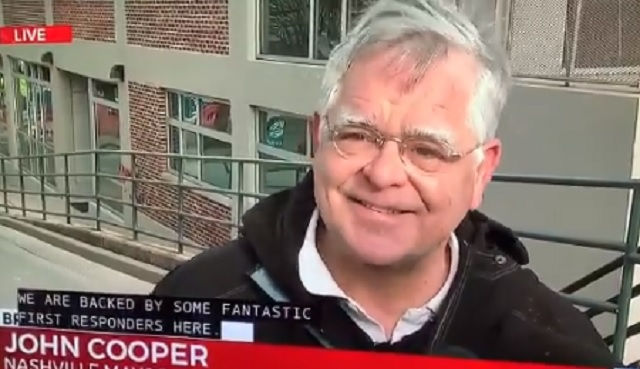 Nashvile mayor John Cooper had a strange reaction to a Christmas day explosion in his city.

On Friday morning, a large explosion that is being called an “intentional act” by authorities went off in the downtown Nashville area injuring three people and causing damage to several buildings.

A Christmas morning explosion that rocked downtown Nashville, injuring at least three people and damaging dozens of buildings, is believed to be an intentional act, authorities said.

According to police, officers with the Metro Nashville Police Department were responding to a call of shots fired around 5:30 a.m. CT Friday when they came upon an RV parked in front of an AT&T transmission building at 166 2nd Avenue North.

The RV was playing a recorded message that indicated a bomb would explode in 15 minutes, Metro Nashville Police Chief John Drake said during a news conference Friday.

While speaking to the media, Nashville mayor John Cooper awkwardly laughed and joked about the explosion which rubbed people the wrong way.

In Nashville we have a tyrant as a Mayor @JohnCooper4Nash is now laughing, possibly another explosion/bomb today. It’s disgusting he would think this is a joke. He’s destroying our economy, and owns construction businesses here?!?! #nashvilleexplosion #nashvillebomb pic.twitter.com/QlETmnC9Gb

What a bizarre reaction from the mayor of Nashville… https://t.co/mEdyIvKVE3

♦️Why is Mayor John Cooper laughing when he says, “….make sure this is the only explosion that’s gonna happen in Nashville today.”⁉️👀👇 pic.twitter.com/kOd7BY7Ko7

John Cooper is clearly just not good at this. At all. pic.twitter.com/NhDjNEoGX7