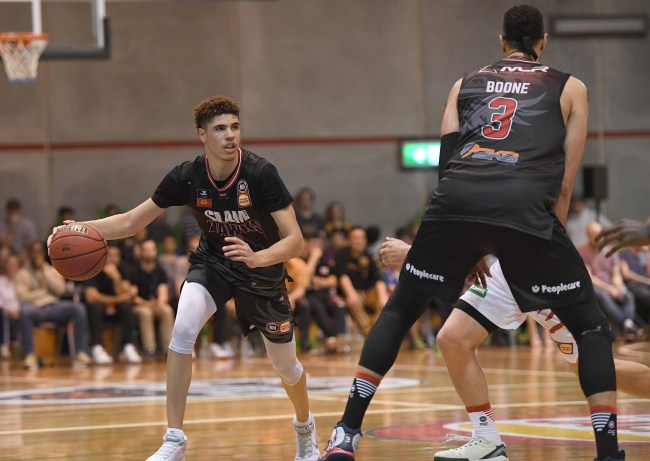 LaMelo Ball has been balling out in the Australian NBL league this season and impressive NBA scouts. Ball has been playing so well that his draft stock is rising very fast among NBA circles.

That was the main takeaway from a four-day trip to Tasmania, home of the NBL Blitz, the Australian and New Zealand basketball league’s annual preseason tournament. This year’s event drew 27 NBA scouts to check on the progress of Ball and RJ Hampton, both potential top-five selections in 2020.

Ball looked like an NBL MVP candidate. He put up an impressive 19-point, 13-rebound, 7-assist performance against the defending-champion Perth Wildcats. Reigning defensive player of the year Damian Martin tried in vain to slow Ball but was completely unable to faze the 18-year-old. Ball showed similar sparks of potential in earlier preseason contests, most notably dropping 21 points on 11 shots against South East Melbourne

Apparently played so well this week that NBA execs believe he could get serious consideration to get drafted #1 overall in the 2020 NBA draft.

“If he keeps this up, I don’t see any way he isn’t in the conversation for the No. 1 overall pick,” one NBA executive told ESPN. “He completely changed my perception of the type of prospect he is, and all of the background info I gathered here from his coaches and teammates paint a very different story of what I thought about him off the court as well.”

“He reminds me of Luka Doncic,” a scout said. “Just in terms of his size, his feel and his creativity.”.

As you can see in the videos below, LaMelo looks completely unstoppable against Australian pros.

Here’s a look at some of LaMelo Ball’s highlights from Illawarra’s OT win over Perth at the NBL Blitz in Tasmania. 19 PTS, 13 REBS, 7 AST in 32.4 MIN while knocking down 4-of-6 3s with @DraftExpress and almost every NBA team on hand. Great start for the 6-7, 18-year-old PG. pic.twitter.com/drFeQhZ1em

Ball is getting compared to Luka Doncic by the scouts who saw him play this week in Australia and that’s some lofty preaise considering the season Doncic just had in the NBA.

“He reminds me of Luka Doncic,” a scout said. “Just in terms of his size, his feel and his creativity.”

“He plays with incredible pace. He’s never sped up. He’s never rattled by anything that’s thrown at him,” the same scout said. “You’re expecting something magical to happen every time he has the ball. He sees everything. He can make every pass with either hand off a live dribble. His style of play is tailor-made for the NBA game, especially if you surround him with shooting and better finishers.”

There’s still a long time between now and the NBA draft but it seems like LaMelo is a lock to be a top 5 pick in 2020.