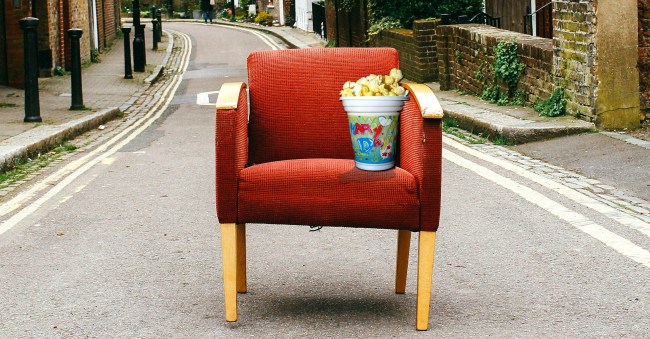 In a perfect example of something that is the complete opposite of social distancing, a guy’s neighbors took to the street and got into one of the most bizarre fights you’ll ever see. Of course, because why the heck wouldn’t you, he shot several videos and live-tweeted the whole thing as it was taking place.

Leo must have not been alone because someone else was able to get a different angle of the fight, because this is a quality production.

We got angles too 😂😂 pic.twitter.com/vZQx7wfjKL

Round two involved a two-by-four.

Then our man, after a well earned victory, enjoyed himself a smoke.

Then, because Leo is a good neighbor, he created a GoFundMe for our champion to help defray the cost of his impending medical bills.

After all this shirtless dude had a round 2 but with a 2x4 then cops were called BUT shirtless got broken ribs and nose, and roundhouse kick man got a broke arm 😬

Alright everyone I made a gofundme to help pay for medical bills/get him a deserved beer so please if you would like to help any and all proceeds will go to my neighbor https://t.co/KEcRvEMuAT

“Hey ya’ll this a go fund to help our Jeff Goldblum clone, this is his neighbor that recorded and saw it happen and am trying give back to the man while he needs help with the medical bills that are rising now for his broken arm. He also suffers from a medical disorder that’s very painful, and it is impossible to get coverage for because it happened during his service with the marines. The military has refused to cover the medical bills that requires prosthetic dentistry even with his honorable discharge! So if you would like to help him out or just get him a beer any and all proceeds will go to him. Thank you all!”

Naturally, because it was such an amazing sight to see, people had questions.

why does the power ranger movin dude kick him in the kidney after he got the dub?

Apparently, according to Leo, the shirtless dude “deserved” his butt-whooping because of something he said.

“He started it,” said Leo. “Before this he was yelling at glasses guy calling him every racial slur too, shirtless man threw the first swing as well. And literally anytime I’ve ever talked to him he always says disgusting things towards women.”

Yes the guy who was shirtless deserved it. He started it. Before this he was yelling at glasses guy calling him every racial slur too, shirtless man threw the first swing as well. And literally anytime I’ve ever talked to him he always says disgusting things towards women.

Then the inevitable happened. The fight became a meme.

When I saw those kicks it was time to call the boys in....💀☠️💀☠️ pic.twitter.com/W7AJVMJkxe

Had to come through with the edit... pic.twitter.com/quaZHDPovR

this man hit him with the jawbreaker pic.twitter.com/SO0xpkZbYR

Here's my edit on how the fight should've been pic.twitter.com/uA4qHtM4Ad

Many were just, rightfully, super impressed with our champion’s incredible form.

had to fix the glasses first pic.twitter.com/xu3Fjj9HVs

Bro that switch stance to the wheel kick was WET.

Yo, my guy was like “lemme make sure this man knows EXACTLY which ribs I’m about to break.” pic.twitter.com/JTOhJuaCtL

There is a lot more, so if you want more entertainment, by all means, just click here and check out the numerous comments.