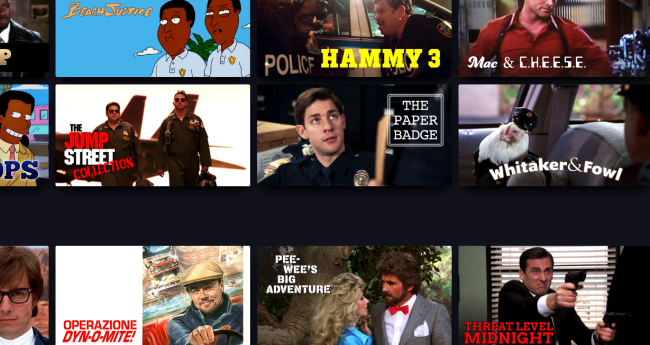 We’ve all watched at least of portion of them, and love them all. Movies and TV shows like Threat Level Midnight, Tool Time, Angels With Filthy Souls, McBain, Scorcher, Stab, Stab 6, and Stab 7.

Granted, they aren’t actually real TV shows or movies. They’re fictional and usually appear inside of another TV show or movie.

“Are you like me and love a fake movie within a movie? Or show within a show? Check out Nestflix: the only platform for your favorite nested films and TV shows,” tweeted web designer Lynne Fisher, the creator of Nestflix, on launch day this week.

Launch day! Are you like me and love a fake movie within a movie? Or show within a show?

Check out Nestflix: the only platform for your favorite nested films and tv shows.

Now we finally have a place to see all the fake quotes, synopses, stills, cast members, directors and which original film or TV show in which they actually appeared all in one place.

Who will ever forget The Dirk Diggler Story? Or A Burns For All Seasons? Or Crime Scene: Scene of the Crime? Not us, now! There are OVER 400 of these compiled on Nestflix.

At first, Fisher was taking suggestions for additional titles to add to Nestflix, but she’s gotten SO many inquiries that she’s had to temporarily pause it because she needs “time to catch up and read them all.” That hasn’t stopped people on Twitter though.

Can’t believe I missed this one, but just added the most submitted (by a lot) show within a show.

Check out Lieutenant ¡Diablo! from @LuciferNetflix now on #Nestflix. https://t.co/RUnQEQmS4e

Can you please add Town Talk with George Newman? pic.twitter.com/Fot8Eai3aW

It’s really quite a genius idea. The only thing I can see that’s really missing from it is Shazaam.