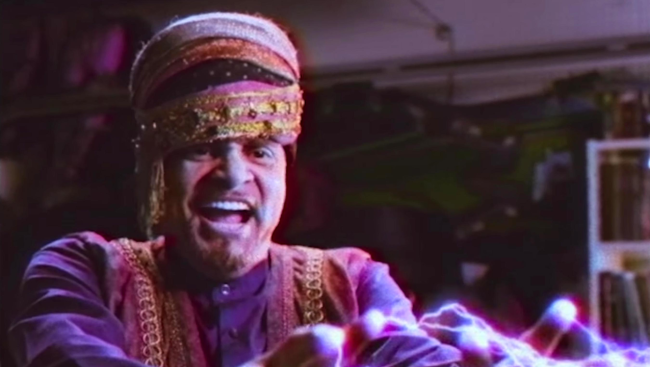 For over two decades now, people all over America who were around in the 1900s have held the belief that the comedian Sinbad starring in and played a genie in a movie called Shazaam. (Full disclosure: I am one of these people.)

This week, Sinbad’s kids Paige Bryan and Royce Adkins, spoke to NBCLX about the Shazaam phenomenon.

That Sinbad genie movie IS real.

She’s not just talking to all the random people who still believe Shazaam was a real movie starring their dad, she’s also talking to some of her relatives.

Even “people the closest to us who know everything about our family” have second guessed themselves when it comes to the existence of Shazaam, said Royce.

So, why do people (like me) continue to believe that such a movie existed when the facts clearly state that it does not?

It is due to something called the Mandela Effect.

According to Medical News Today, “The Mandela effect describes a situation in which a person or a group of people have a false memory of an event.”

Fiona Broome coined the term over a decade ago when she created a website detailing her recollections of former South African President Nelson Mandela dying in prison in the 1980s.

Nelson Mandela did not die in prison in the 1980s. After serving 27 years in prison, Mandela served as president of South Africa between 1994 and 1999 and passed away in 2013.

So, what causes the Mandela Effect? There are several possibilities.

One is false memories which can contain elements of fact, closely resembling the actual event in question.

Another is something called confabulation or unintentionally false statements told as, and believed to be, facts.

A third cause is called priming or suggestibility where are person is exposed to a stimulus that directly influences a person’s response to a subsequent stimulus.

Finally, and this is the best one, there is the idea that there are alternate realities or parallel universes where these memories did actually happen.

That’s the one I am going with, because despite Sinbad’s kids belief that people are just confusing their dad and the nonexistent movie Shazaam might with Shaquille O’Neal and his movie Kazaam, I still swear that Shazaam starring Sinbad exists and not only that, I have watched it.

Sinbad’s kids say one particular group is most obsessed with the existence of this film: fellow millennials.

Bryan said she was in her mid-20s when she started hearing the rumor for the first time. “All of a sudden my peer group was like, ‘hey, remember that movie your dad did when he was a genie?,’” she said.

Have you noticed no one my age has seen this so called Sinbad Genie movie, only you people who were kids in the 90's. The young mind !

Sinbad has even offered thousands of dollars in reward money for anyone who can prove the movie existed.

His kids do admit that people could be confusing their dad’s appearance on the ’90s show All That where his character had a “very genie-ish” wardrobe.

They also cite a Sinbad the Sailor special their dad did where it kind of looked like he was wearing “genie clothes.”

Sinbad: Why do 90s kids always think I played a Genie?

Also Sinbad: *dressed like a Genie throughout the entire 90s* pic.twitter.com/0uecXNu1mS

Just try telling that to people like a man named Don who claims to have ordered two copies of Shazaam for the rental store his uncle owned in the 1990s.

“I had to handle the two copies we owned dozens of times over the years,” said Don. “And I had to watch it multiple times to look for reported damages to the tape, rewind it and check it in, rent it out, and put the boxes out on display for rental.”

I swear man if something happens to me and I get to the other side and find out that Sinbad actually played in a damn genie movie I’m gonna be very upset.

Seriously. At this point can someone like Disney just go ahead and make this movie happen because I am pretty sure that I, and many others, will go to our deathbeds wearing that Shazaam is a real thing that existed.