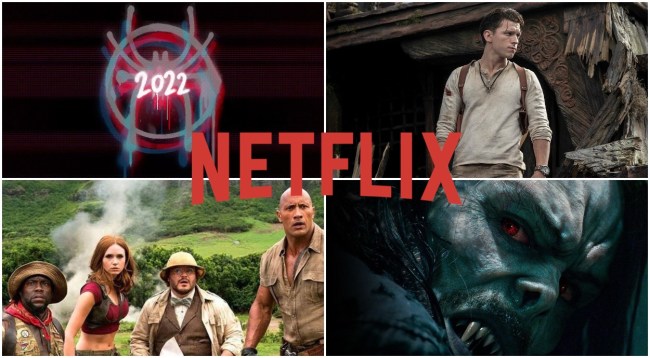 Netflix has, once again, upended the movie business: starting in 2022, all major Sony films will hit Netflix after they finish their theatrical run.

Starting in 2022, Netflix will be the first US streaming home for Sony Pictures films following their theatrical releases. Get ready for UNCHARTED, MORBIUS, BULLET TRAIN & WHERE THE CRAWDADS SING, plus future sequels to VENOM, JUMANJI, BAD BOYS & SPIDER-MAN: INTO THE SPIDER-VERSE

Venom: Let There Be Carnage and Spider-Man: No Way Home are 2021 releases and therefore are not included in the deal. The eventual third Venom film, though, will be a part of the deal. As for the fate of Tom Holland’s Spider-Man, we’ll just have to wait and see what happens in December’s No Way Home.

Sony’s 2022 releases include Escape Room 2, Morbius, Uncharted, Bullet Train, Where The Crawdads Sing, and the Spider-Man: Into the Spider-Verse sequel. Beyond 2022, there will be entries in franchises such as Bad Boys, Jumanji, and Masters of the Universe.

As a result of the reported four-year, $1 billion deal, Netflix will have an 18-month exclusive window for Sony films after they complete their theatrical run. According to reports, “multiple bidders” were angling for the streaming rights to Sony’s projects.

“Sony Pictures is a great partner and we are thrilled to expand our relationship through this forward-thinking agreement,” Netflix film chief Scott Stuber said in the official announcement. “This not only allows us to bring their impressive slate of beloved film franchises and new IP to Netflix in the U.S., but it also establishes a new source of first run films for Netflix movie lovers worldwide.”

The strategy mirrors that of Paramount+, who will begin streaming their films 45 days after their theatrical release, and HBO Max, who confirmed earlier this week that their 2022 slate, including films such as The Batman, would NOT be hitting HBO Max the same day they hit theaters, and will instead debut on the streamer at a later time.

The move has been a long-time-coming for Sony, who’s been one of the only major movie studios to not launch their own direct-to-consumer content service during the dawn of the streaming wars.