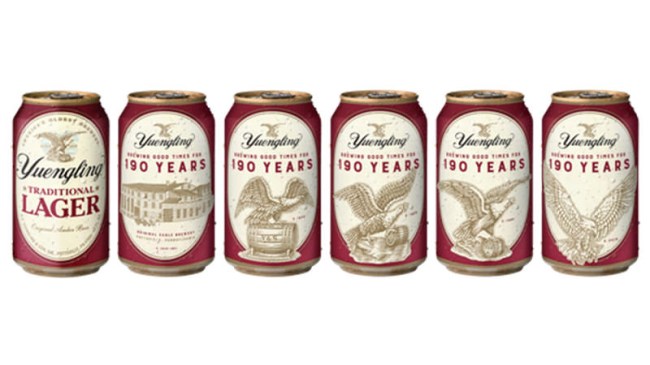 The holidays are here! Many breweries release special edition beers and roll out new flavors in November and December. We searched around this great country to find the most interesting and most exciting new beer releases and there are some delightful new additions.

Yuengling is American’s oldest brewery, founded way back in 1829. Next month, Yuengling will honor their illustrious history by releasing a limited edition Bourbon Barrel Reserve beer. Starting on January 11th, Yuengling will serve up a new beer that has been aged for 120 days. Yuengling will do something with this beer that they haven’t done since Prohibition — age the beer in caves. To celebrate the distinguished brewery’s 190th anniversary, Yuengling ages the beer in centuries-old hand-dug caves, a process they did back in the 1800s as a way of fermentation before refrigeration existed. Visitors who take a tour of the Pottsville, Pennsylvania brewery will also be able to check out the beer caves and sample the limited edition Bourbon Barrel Reserve beer while it lasts.

Probably the most anticipated beer release every year in recent memory is Goose Island. It’s only fitting that Goose Island releases their highly coveted beers on Black Friday because the crowds eagerly line up to get their hands on these iconic barrel-aged stouts like a super cheap big screen TV the day after Thanksgiving. This year was no exception as crowds swarmed the brewery in Chicago to snag this black gold.

What would you wait in this kind of line for? Everyone here is waiting for @GooseIsland’s Bourbon County Stout at @BinnysBev in Lincoln Park! 🍻 Doors opens at 7 a.m. pic.twitter.com/Nhm326KZpL

The original Bourbon County Brand Stout dates back to 1995, but the flavor differs each year based on the barrels. You should know that these are delightfully boozy beers — the flagship beer stands in at 14.7% ABV, but the alcohol content does not overwhelm the beer and it is silky smooth. You definitely need to delicately pour this thick beer in a snifter, let the beer breathe because it makes a big difference on the taste.

You’re going to get heavy smell and taste of bourbon as you would expect, but you’ll get the sweeter aspects almost like pecan pie with heavy vanilla, plus decadent chocolate flavors. I also sampled the Midnight Orange stout that has smells of Valencia orange zest and the taste is deep dark chocolate or cacao nibs followed by hints of citrus. Again, be careful because these beers are sneakily spiked, the Orange Midnight comes in at 15.2% ABV.

When you first see The Variant II bottle you think you’re looking at an expensive bottle of vintage Dom Perignon sparkling wine, but the reality is even better — The Variant II is a glorious beer in a wonderful package. Schlafly Beer, which is the largest, locally owned craft brewery in St. Louis, offers their very exclusive limited release.

The Variant II is a 9.4% ABV imperial stout, but this is a wonderfully smooth craft beer. You get fantastic flavors of cherries, not candy-like, but a genuine flavor because it was aged with sour cherries. The Variant II is aged in brandy barrels for six months and combined with the cherry flavors, this brew evokes an impression of an expertly prepared Old Fashioned or Manhattan cocktail. There are also hints of almond and luxurious dark chocolate.

Creature Comforts Brewing Company out of Athens, Georgia, is releasing a refreshing Tritonia beer staring the bright flavors of pineapple and lemon. Tritonia is a tart, yet sweet gose with hints of coriander and sea salt. The limited edition 4.5% ABV beer will be available on draft as well as in 6-packs of 12-ounce cans.

Leinenkugel’s welcomes in winter with their Snowdrift Vanilla Porter. This 6% ABV porter is aged with real vanilla, but it isn’t overpowering. Other hints of molasses, cocoa, coffee, and caramel are subtle, which makes this a tremendous porter that is available anywhere.

New Belgium Brewing is ready to celebrate New Year’s Eve with their intriguing beer that will attempt to replace Miller High Life as the new “champagne of beers.” The new Brut IPA is a bubbly and effervescent brew that comes off like a sparkling wine. This beer will even have wine notes of white grape and a dry finish.

A post shared by Cape May Brewing Co. (@capemaybrewco)

Cape May Brewing Company out of New Jersey rings in the Christmas season with their Boughs of Barley beer. This aptly named holiday brew is an Imperial stout barrel-aged for a year in second-use Cognac barrels and eighteen months in Scotch whisky barrels.

This beer release is not only delicious but goes to a great cause. The Karl Strauss Brewing Company is releasing their Resilience IPA and Strauss Relief Brut IPA on Friday, December 21st. If you head to one of the 10 Karl Strauss locations in southern California and buy either of these two beers, they will donate 100% of the sales to the Sierra Nevada Camp Fire Relief Fund and to the California Firefighters Association to help those affected by the devastating wildfires.