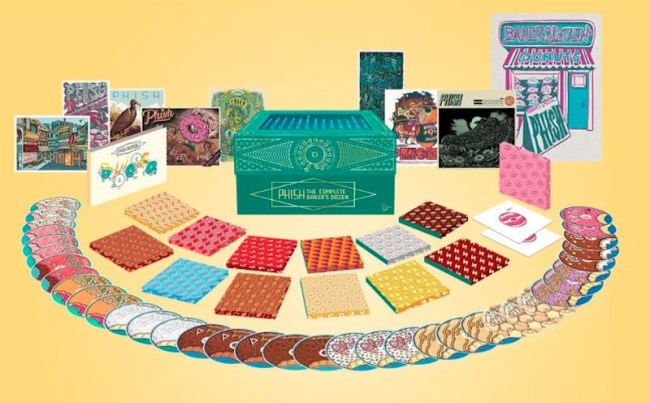 Welcome to the BroBible New Music Round-Up, where we see what new music has been released this week and celebrate the start of Pentatonix season. We are here for the acapella and casual beat-boxing that goes with it. Follow me @ryanoconnell79

Earl came back into our lives earlier this month when he released the single “Nowhere2go.” It was his first release in what had seemed like a long effin’ time, but it was also a promising sign that his long-awaited follow-up to his 2015 album I Don’t Like Shit, I Don’t Go Outside: An Album by Earl Sweatshirt was about to finally come out. Some Rap Songs is the Odd Future vet’s third album and it’s been a work in progress since December of 2016, when Earl first started  “trying to make another collection of shit.”

At Camp Flog Gnaw, the L.A. festival driven by Earl’s buddy Tyler, the Creator, Earl previewed a handful of tunes from Some Rap Songs and was pleased with the response the songs received, saying the response “was better than I expected.”

On Some Rap Songs, Earl is aiming for brevity, hence the straightforward album title, as well as taking a cue from his father, the late South African poet Keorapetse Kgositsile, and pushing himself lyrically. On “Playing Possum,” there are samples from both Kgositsile and Earl’s mother, Cheryl Harris, a law professor in California. The album also includes features from Navy Blue and Standing on the Corner.

Black Thought dropped this one super low key, posting the album’s cover art on Instagram a few weeks ago and then releasing it without much fanfare earlier this week. Someone obviously didn’t get the memo that we drop music on Fridays. Sometime Thursdays, but mostly on Fridays. Unless your Beyonce. Then you release music whenever you want to.

The album is a sequel to Streams of Thought, Vol. 1, which was a collaboration with 9th Wonder and the Soul Council. This time around the Roots’ frontman is teaming up with producer Salaam Remi, who has worked with Nas, Big Boi, Alicia Keys and Kendrick Lamar among others. It’s only nine songs, but Black Thought makes those nine songs count, showing off the skills that have made him one of the best lyricists and rappers out there today. Black Thought seems comfortable working in a more traditional hip hop setting and unencumbered from the more adventurous turns and travels The Roots have taken on their past few albums.

Am I still worried about the future of The Roots? Yes. But new music from Black Thought makes me slightly less worried. I’ll take it. It’s 2018. We take wins wherever we can get them.

The 1975 A Brief Inquiry Into Online Relationships

What isn’t in doubt though is the band’s ambition. They took the stage at Lollapalooza in 2016 by introducing themselves as “your favorite new band” and if Earl Sweatshirt is out there shooting for brevity, The 1975 are going in the exact opposite direction. We all had that friend in college who lived their life subscribing to the battle cry go big or go home. The 1975 have made that their mantra, their mission statement, their next album title, if only it were four or five words more.

The band has been teasing the release of their third album for a few months now, dropping singles as if they were bread crumbs or flares shot over a crowded harbor. A Brief Inquiry Into Online Relationships is the follow-up to the band’s breakthrough album, I like it when you sleep, for you are so beautiful yet so unaware of it. Sound-wise, they don’t veer too far off their course, but also build upon that sound, which sounds considerably more like 1985 than 1975. The 1975 seem destined to be one of those bands you either love or have no opinion about whatsoever. This new album probably won’t change that, but who knows.

For an incredibly comprehensive review of A Brief Inquiry Into Online Relationships, check out Ryan Leas’ over at Stereogum. For a taste of what music actually sounded like in 1975, you’re welcome.

Championships is Meek’s first full length release since being released from prison earlier this year. Before that, his last album came out in 2017, but in the life of Meek Mill, that seems like a lifetime ago. For Championships, Meek is pulling out all the stops, including partnerships with Foot Locker and Puma and heading out tour early next year.

Earlier this week, Meek wrote an op-ed in The New York Times, calling for prison reform and stopped by Ellen to discuss the topic further. He’s also shedding light on his beef with Drake and the squashing of said beef, which happened back in September when Meek appeared at a Drake show in Philly. Apparently Drake is good, if not possibly a sketchy ping pong player, prone to do “some slick Drake shit.” I’m not sure what that means, but it’s definitely good to know and keep in mind if such a situation where to present itself.

The new album shows that Meek rolls deep as it features guest spots from Cardi B, Kodak Black, Fabolous and Ella Mai. It also features a nod to Beyonce, a supporter of Meek’s while he was in prison, with Meek working in Beyonce’s “Me, Myself and I” into “24/7.” You may also be wondering if Meek addresses his past relationship with Nicki Minaj. That would be yes, yes he does.

I’ll just leave it at that.

Tweady, as far as I can tell, does not take any shots, nor does he make any references about Nicki Minaj on his new solo album. The Wilco frontman instead enlists writer George Saunders to write liner notes.  Rock ‘n roll!

The Alchemist’s new EP is short. It’s only four songs. But those four songs aren’t messing around. One features Earl Sweatshirt, another features Black Thought. All four feature solid beats and more quality production from The Alchemist, who recently did work with Freddie Gibbs and Curren$y on their Fetti collaboration.

I’m going to be honest. I don’t know why more people don’t just release EPs these days. Hey, no one is listening to albums that much anymore. EPs seem to be a suitable work around to the short attention spans that are out there today. It just makes sense, guys.

Now if you’ll excuse me, I’m now going to talk about a 36 disc box set.

In the summer of 2017, Phish played thirteen straight shows at Madison Square Garden in New York City. As per usual, the band played two sets a night, but for this run, they never repeated a song. Not once. The end result was 237 songs played over the course of the Baker’s Dozen run. You can say a lot about Phish, but you definitely can’t say that those Vermont dudes are lazy and ones to rest on their laurels. Even on their downtime, members of the band are out there commenting on the recent election on MSNBC.

Now the band has released the entire run as a 36 disc box set. And yeah buddy, the box set wouldn’t be complete without a book, as well as a random assortment of schwag: setlists, exclusive prints, essays, patches and more. For a review of The Baker’s Dozen run check out this one, from Rolling Stone.

Apparently Ghostface had so much fun putting together his most recent album, The Lost Tapes, that only a month later he decided to drop two remixes of the album packaged as one double disc set. Ghost Files features Bronze Nazareth taking a swing on one side and Agallah getting his shot on the other. I wasn’t asked to participate. And while I won’t go so far as to say I’m not at least a little bit hurt, I do understand. Ghostface and I haven’t talked in years.*

Ghost Files features tracks where Ghostface is joined by Snoop Dogg, E-40 and Benny the Butcher among others.  On “Watch ‘Em Holla,” Ghostface teams up with fellow Wu-Tangers Raekwon, Masta Killa and Cappadonna. The group recently celebrated the 25th anniversary of their debut album Enter the Wu-Tang (36 Chambers,) with part of the celebration including November 9th being named Wu-Tang Clan Day in their native Staten Island.

The New Mastersounds The Nashville Session 2

If you don’t know who The New Mastersounds are, ask your friend who is into jam bands. They most likely do and can explain to you how The New Mastersounds are a dope funk band from England and they’ve been around for years. The Nashville Session 2 is a sequel of sorts to their 2016 album, The Nashville Session, with the band playing live in front of a small audience while the tape rolled. You know, how they used to do it.

This Week in Who Did It Better: Ariana Grande Edition

In one corner there’s the 1975, who covered “thank u, next” during an appearance on BBC Radio 1’s Live Lounge.

And in the other corner it’s Mumford & Sons, who tackled “breathin” during their appearance on BBC Radio 1’s Live Lounge.

Who won? Hit me on Twitter (@ryanoconnell79) and let me know who you thought won and why.

The slate is a little light on new Christmas music this week. To tide you over, here is a list of ten alt-rock versions of Christmas classics.

Also, do yourself a favor and check out this year’s BroBible Holiday Gift Guide For Men.

This is my favorite band break-up notice ever. pic.twitter.com/WsIq1i2d6p

Our thoughts and prayers go out to the members of Witchrot. Well, except for that guitarist. Fuck that dude.

And We’ll End With This…