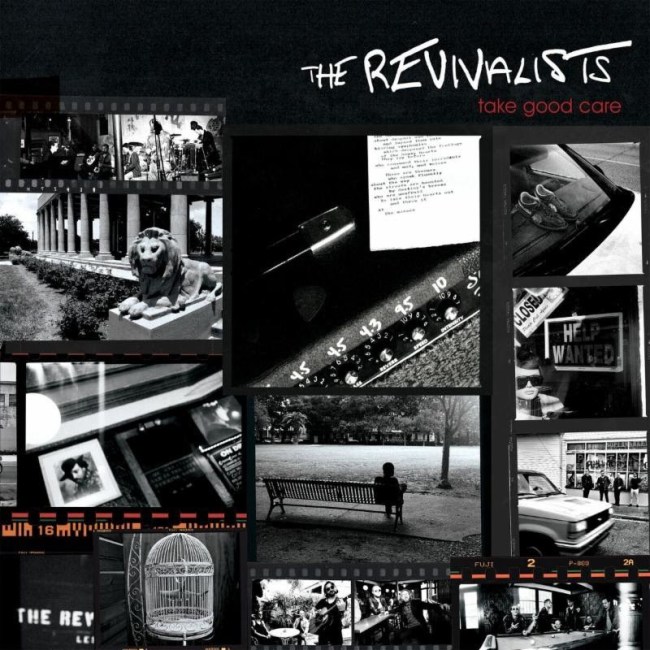 Welcome to the BroBible New Music Round-Up, where we see what new music has been released this week (even though we’re still mainly listening to the new Vince Staples’ album.) Follow me @ryanoconnell79

To say that rock music, and I mean big old, stadium-ready rock music, is in a rough spot these days would be an understatement. Rock music was in a rough spot a few years ago. Now? Now the idea of rock music still being a main stream musical genre is barely holding on and it’s next of kin has been called. So has the priest. Things aren’t looking great. We can only hope rock music has it’s affairs in order.

This year especially has been tough, as albums by two rock acts who have the power to reverse course for the ailing genre, Jack White and the Arctic Monkeys, delivered albums that were straight up duds.

White’s album had some truly great moments, but also some big time, cringe-worthy moments. No one, and I repeat, no one wants to hear Jack White rap. I want to hear Jack White play some killer guitar and I want to see pictures and videos of White enjoying a baseball game because he always looks so serious that it’s nice to see him having a good time. And then when it comes to the Arctic Monkeys, they decided to follow up a truly great rock record (AM) with Tranquility Base Hotel & Casino, a album that is most certainly not a truly great rock record, let alone a rock record at all.

Can Muse be the ones to turn things around? If you care about rock and if you care about rock music being a big deal in the world of music, then you should definitely hope so. The British trio are back with their first album since 2015’s Drones and if the first single they released from Simulation Theory, “The Dark Side” is any indication, they are bringing more of their arena and stadium-ready jams with them.

Muse’s formula is relatively straight forward. There’s a steady back beat and there’s guitar hero riffs and there’s futuristic synth lines and there’s Matt Bellamy’s soaring, reaching for the cheap seats vocals. They’ve yet to really diverge from that path and seem to relish the idea of being an arena rock band. Muse goes big, plain and simple. They’re releasing videos for each song on the new album, as well as releasing a deluxe version (16 songs) and a super deluxe version (21 songs,) and starting at the end of February, embarking on a massive, totally Muse-esque, world tour.

Rock music needs you, Muse. Don’t let us down.

The Revivalists are a rock band, but they are also more than that, as their sound also features elements of soul, funk and folk mixed through one of those New Orleans-brand blenders that makes anything from that wonderful town sound like the soundtrack to a hell of a good block party. The New Orleans band broke through with their last album, Men Amongst Mountains and the song “Wish I Knew You,” and after a few years of touring in support of the album and seeing their audiences grow, they are back with Take Good Care.

You can tell that The Revivalists have hit it big because they’re touring with background singers. It’s a sure fire way to see if a band has graduated to the next level. They’re also touring with a horn section and have added a percussionist to their lineup, making for a packed stage when they play live. The band played Red Rocks in Colorado back in September and have released a clip of them playing the lead single from Take Good Care, “All My Friends,” which is definitely worth checking out if you’re a fan.

“We have so many different elements and sounds and textures that we want to see shine through,” David Shaw, the band’s singer, said to Billboard. “We tailored that and picked each producer to do their thing the best, and to make those different elements of the band shine.”

Any band’s album after their breakthrough album is always one to keep an eye on and this new one from The Revivalists is no exception. It’s a lot easier when no one is watching, but this time around, their album is one of the most anticipated ones of the season. I mean, no pressure or anything. At least they’re not Muse and have the weight of an entire genre on their shoulders.

So far we’ve covered arena rock and roots rock, so let’s check in with indie-rock, specifically Boygenius, a supergroup in indie-rock circles. Made up of Lucy Dacus, Phoebe Bridgers and Julien Baker, all of whom have had varying degrees of success on their own, Boygenius released their debut EP back in October, but it’s officially released today.

The EP consists of some truly beautiful harmonies and the talents of each of three members are deployed expertly, whether it’s in the lyrics or the vocals or the song-writing. The band’s name is in response to how an artist’s gender can come into play when viewing their work. A dude’s great work stands out, whereas women are frequently lumped together.

The legendary soul singer Charles Bradley passed away in September of 2017, but as is the way of the world now, he has a new album out. Black Velvet consists of songs that were recorded during the recording of his three previous albums, the last one being 2016’s Changes. Black Velvet also features Bradley covering “Heart of Gold” by Neil Young and “Stay Away” by Nirvana.

Bradley was about as far from an overnight success as possible. “The screaming eagle of soul” grew up in poverty in Florida before ending up in Maine, where he worked as a cook. He eventually started picking up gigs as a James Brown impersonator, which is how mainly supported himself after leaving the great state of Maine and hitchhiking around the country.

In the mid-90’s he moved to Brooklyn to reconnect with his mother and while still doing the James Brown act, was discovered by Gabriel Roth of Daptone Records, a discovery that lead to Bradley being able to perform under his own name for the rest of his life. The marriage of Daptone and Bradley was a fruitful one and backed mainly by the Menahan Street Band, Bradley recorded four solo albums including Black Velvet. Bradley also appeared on over a dozen songs featuring other Daptone artists such as The Budos Band and Sugarman & Co.. among others.

The lesson here? Don’t be afraid to play the long game, kids. You never know when opportunity might present itself.*

* This message was brought to you by Patience. Patience: the thing that prevents you from punching holes in the wall and suffering from crippling bouts of road rage.

Earlier this week, Earl Sweatshirt started dropping some weird, short videos and the general consensus was that the dude was finally releasing a new album, an album that would be his first since 2015. Then on Wednesday, with most of the news was having to do with fallout from the 2018 elections, the young rapper posted a video on Instagram with the caption “NOWHERE2GO TOMORROW MORNING TAP IN.”

Is that the name of the album? Is it an album? Is it finally this new album that The Alchemist said was “a masterpiece?”

But hey, it’s 2018 and things are super weird and uneasy in this country of ours, so we’ll take what we can get.

Yes. It’s 2018. Nothing makes sense anymore so in a way, it makes total sense that Bill Nye would be on the new Aoki joint. Just got with it. Everything is fine.

In addition to albums, Aoki has been working on a comic book based on the Neon Future series. The books take place in the future, in a world where advanced technology has been outlawed.

“My obsession with mixing science and tech all started when I was a kid reading comic books. It took me on a ride to see how far the imagination can go, seeing ideas crossing the threshold from science fiction to fact,” Aoki explained. “That’s the foundation of Neon Future, where we’re headed as we evolve, our downfalls, our victories and breakthroughs to find a way to survive and thrive through it all.”

This reminds me of a recent episode of The Watch podcast, where the show’s hosts kicked around ideas for classic albums that could be turned into TV series.

The seven disc box set features the original double album remixed, as well as three discs of “Sessions” outtakes, with alternate versions of songs like “Revolution,” “Blackbird” and “While My Guitar Gently Weeps.” It also includes a 12-minute version of “Helter Skelter,” although there is apparently an almost half hour long version out there somewhere. There is also a book, photos and copies of handwritten lyrics.

The Wu-Tang Clan For the Children

While we’re out here celebrating anniversaries, let’s not forget that Enter The Wu-Tang (36 Chambers) is turning 25 years young. To pay homage to this iconic album, the group has released For The Children, a mini-doc that features A$AP Rocky, A$AP Ferg, Joey Bada$$ and other$ talking about the group and the album’s legacy.

This is the first of a handful of Wu-related projects scheduled to come out in the near future. Hulu is doing a Wu-Tang origin story called Wu-Tang: An American Saga, while RZA is working on a Ol’ Dirty Bastard biopic for Sony. I’m working on Dirt McGirt biopic, so I hope that doesn’t overlap too much with RZA’s.

Ariana Grande “thank u, next”

Earlier this week Ariana Grande released a new song, “thank u, next.” As is the case when it comes to these matters, I defer to The Biebs.

Thank you next is a bop. My favorite song. Least this song is smash. Fire

According to the young people I talk to, songs are currently broken up into three main categories: a bop, a jam, a banger. I’m not entirely sure what constitutes a bop or a jam or a banger. But Justin Bieber says this new Ariana song is a bop, so it’s a bop.

“I’ve been a fan of Motown and soulful Christmas songs since I was a young child,” he recently said. “As much as I love Sinatra and Nat King Cole, I feel like the holiday spirit needed a funky revival.”

Blacc’s Christmas album features mostly originals, but he does take a swing at a couple of classics, “All I Want For Christmas Is You” and “Last Christmas.”

I'm just going to watch this whenever I'm in a bad mood. pic.twitter.com/ainpUO15LG

For the uninitiated, that’s from Phish’s most recent Halloween show. The band has a history of donning “musical costumes” at their Halloween shows and in past years, have performed entire albums from The Beatles, the Talking Heads, the Rolling Stones and the Velvet Underground. This year, the band performed í rokk by Kasvot Växt.

Who is Kasvot Växt, you ask? Oh just a fictional Scandinavian band that Phish made up, created a backstory for and wrote songs for. Because lest we forget, Phish are four delightful weirdos and as a country, we’re better because of their presence in our lives.

who has the keys to the governor’s mansion

You need some context for this one. Bill Haslam is the current governor of Tennessee, which is where Isbell is from. We’ll give this one a solid C. Dad Jokes are always welcome in this New Music Round-Up.