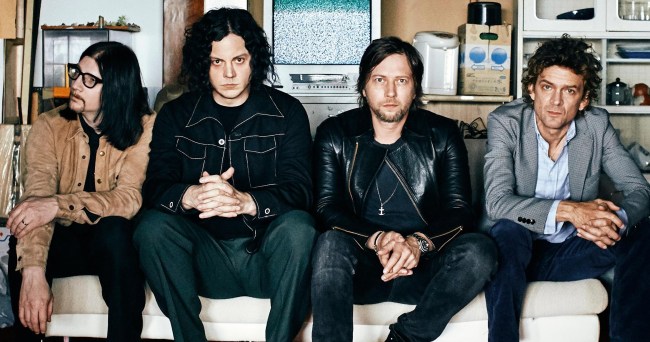 Welcome to the BroBible New Music Round-Up, where we see what new music has been released this week and aren’t sure the world is ready for Championship-celebrating Drake. For more follow me on Twitter:  @ryanoconnell79

Jack White is a hard dude to be a fan of. Yes, he’s an amazing musician. But he’s also an incredibly untrustworthy musician. With The Raconteurs finally returning, I thought I’d celebrate the return of A Jack White I Can Trust.

In this age we’re living in, an age in which we can very easily create our very own greatest hits compilation for our favorite artists, the greatest hits album has become some what of a relic of days gone by. But there was a time when a good greatest hits album was a goldmine. It was an entry point, a catch-all of your favorite tracks, a easy choice when it came time to provide the soundtrack for your latest road trip.

The greatest hits album served a purpose and without them in our lives, something is missing. It’s one thing for us, the fan, to compile a playlist of our favorite tracks from a beloved band. But it’s another thing to have that band do the work for us. It’s their way of telling us that these are the songs that matter.

Or the ones that sold the most.

“First I wasn’t sure how I felt about it but at some point I remembered that when I got my first Cure record it was Standing on a Beach,” Daniels said in a statement. “When I got my first New Order record, it was Substance. That was how I met those bands, and I moved backwards from there but I still listen to those comps. I love a greatest hits LP when it’s done well. It can be a thing unto itself.”

Everything Hits at Once (named after a song on their album Girls Can Tell) comes out on July 26 and in addition to featuring the new song, “No Bullets Spent,” it includes such Spoon classics as “The Way We Get By,” “The Underdog” and “You Got Yr Cherry Bomb.”

The Raconteurs Help Up Stranger

It’s been nearly fifteen years since Jack White and Brendan Benson spent some time at Benson’s Detroit home and came up with “Steady, As She Goes.” Yet those fifteen years together have only produced two albums from the band they assembled after putting together that song, with the last one coming over a decade ago, 2008’s Consolers of the Lonely.

A lot can happen in a decade and for the dudes in The Raconteurs, that mostly translates to solo projects and albums recorded with other bands. But if you go back and listen to those first two albums of theirs, there’s something pure and true to them, the product of lost souls who had finally found each other. It was only a matter of time before they would find their way back to one another.

“If I had my pick of everybody I knew, these are the three guys I wanted to start a band with,” White told Billboard recently. “We all came from nothing — everyone was just passionate.”

For more about the current state of the band, check out that Billboard profile.

Not yet at least.

Given the success of his collaborations with Bruno Mars (see: “Funk, Uptown,) Mark Ronson could be forgiven for staying the course when it came time to record a follow-up to 2015’s Uptown Special. Save your forgiveness though. On his latest effort, Ronson has chosen to set off a new course.

Of course, it should be noted that Ronson played a pretty central role in writing songs for A Star is Born, including the song you can sing along to two-thirds of in your car, “Shallow.”

Perhaps then, we should have expected that when it came time to drop a new album, Ronson would surprise us.

Late Night Feelings first came into our lives when Ronson dropped “Nothing Breaks Like a Heart,” which featured Miley Cyrus, at the end of 2018. At the time, the track was said to be included in Ronson’s new album, a “collection of sad bangers.” There’s no denying that the Miley track was dope, but what the hell are “sad bangers?”

Who the hell knows. What’s important is that Ronson knows what buttons to push and what people to bring along with him when he pushes said buttons. The new album might lack the bright-eyed enthusiasm of Uptown Special, but it jams in it’s own way. Variety is the spice of life, kids.

For more on Ronson and his new album, check out this excellent New York Times profile.

It is at this point that I’d like to take the opportunity to share my favorite Ronson track. It comes off his 2007 album, Version, which is amazing. The album features Lily Allen, Amy Winehouse, the Daptone Horns, Santigold and more.

Okay, so the video for the group’s single is not great. I get that. I do. I don’t want you out there thinking that I condone such things. I definitely don’t.

However, the song isn’t bad. It’s tight, focused, no nonsense, throwback soul music and soul music is always a good time. That is a proven fact, one that has been studied and agreed upon by several well-known scientists.

The track in question, “Fool,” comes off of the group’s latest album. As far as neo-soul music goes, it’s more Lake Street Dive than anything the Daptone folks are doing. That’s not a bad thing. Again, it’s soul music and EVERYONE LOVES SOUL MUSIC.

A Higher Place will be available on both CD and vinyl and the band is set to hit the road later this summer.

What I’m trying to say here is that Migos hosting “The Stripper Bowl” is incredibly on-brand for them.

Earlier this week, the New Music Round-Up’s favorite hip hop group released what can only be surmised as the anthem to said “Stripper Bowl.” It’s like my grandfather used to say – you can’t have a Stripper Bowl without a song called “Stripper Bowl.” He was a very wise man. Very ahead of his time.

So what’s up, Migos? Y’all gonna release a new album this year or not?

As far as I’m concerned, up tempo rockers fueled by loud guitars and louder cymbals will always have a place in music. It just has to be that way. We’ve all agreed and there’s no going back. It’s settled.

So with that being said, Titus Adronicus, purveyors of exactly the kind of music I just mentioned, are back with their latest album, and dude, it effin’ rocks. I mean, I know that there’s tumult around the world, but I know better when Titus’ frontman Patrick Stickles screams it over and over again.

The band first got folk’s attention back in 2010 with their debut album, The Monitor. And while they’ve yet to fully match the heights of the album since then, this new album gets pretty damn close. 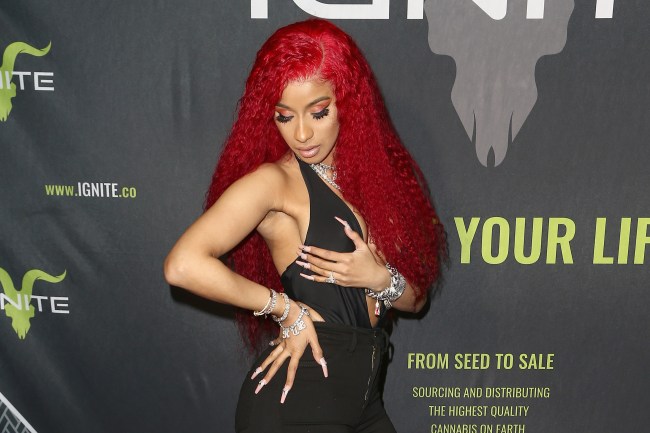 Hey, A Rock Band. They Do Still Exist!

Hey, remember when everyone got all excited because Greta Van Fleet existed and they sounded like Led Zeppelin and everyone was so pumped to have a new young rock band out there, that the fact that sounded exactly like Led Zeppelin was for the most part, glossed over?

Yeah, I remember that too.

It was a weird time.

But that was so last summer. And fall. And early winter. It’s time to move on. It’s time to find a new rock band to pay attention to with the hopes that they could be the next cool, young rock band to remind us of the glory days when rock bands actually meant something.

That band is (or could be, let’s not get ahead of ourselves) is Dirty Honey. The Los Angeles-based four piece play blistering, full-throttle rock ‘n roll along the lines of Guns ‘n Roses, AC/DC, Cheap Trick and more. Unlike Greta Van Fleet, who could never seem to distance themselves from their inspirations, Dirty Honey pays homage to theirs and use it as a jumping off point. Yes, they sound similar to those rock legends that look up to, but not to such an embarrassing extent as Greta Van Fleet did/does.

Dirty Honey formed about two years ago and earlier this year, released a self-titled EP. Since then, they’ve opened for The Who, Slash & the Conspirators and Guns ‘n Roses.

You can learn more about Dirty Honey here. The band will be playing hard rock festivals throughout the summer.

Yeah I guess maybe, but like, not where it was supposed to be and maybe somewhere else that definitely can’t hold the 150,000 people they had talked about having come.

So like, really man, who the hell knows at this point.

For a complete timeline of the evolving clusterfuckian dumpster fire that is Woodstock 50, Vulture has a great one.

Me leaving Cafe Du Monde after one beignet pic.twitter.com/hydIJQpOpL

This Week in Yeah, That Makes Sense 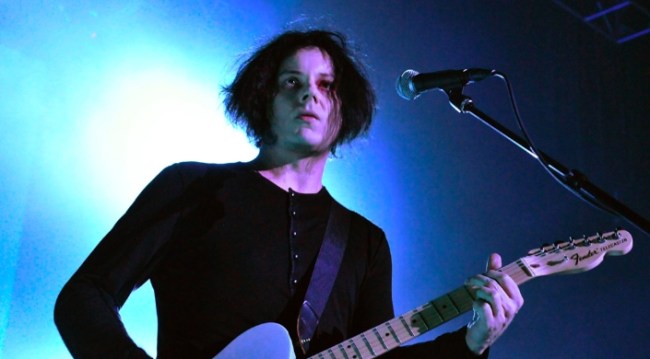 Jack White doesn’t own a cellphone.

If that surprises you, then you obviously don’t know who Jack White is.

How does he get in touch with other vampires, you might be wondering. I don’t know.

I do know that my dude can build a guitar using a few nails and board and that’s pretty dope.

Cardi B played Bonnaroo this year.

And while I’m sure it was great because President Cardi B is great, her set was not without a few hiccups. Well, specifically one hiccup.

Cardi twerked so hard she ripped her fantastic rainbow jumpsuit.

Again, a real sentence I just wrote that I believe and you should too.

A ripped rainbow jumpsuit didn’t slow Cardi down, though. After spending a few minutes off stage, she returned and finished her suit rocking only a white bathrobe because Cardi B is an effin’ rock star and thus, it makes complete sense why she performed at Bonnaroo.

I rest my case.

It was so great hanging with you guys!! https://t.co/tDHJRBP20O