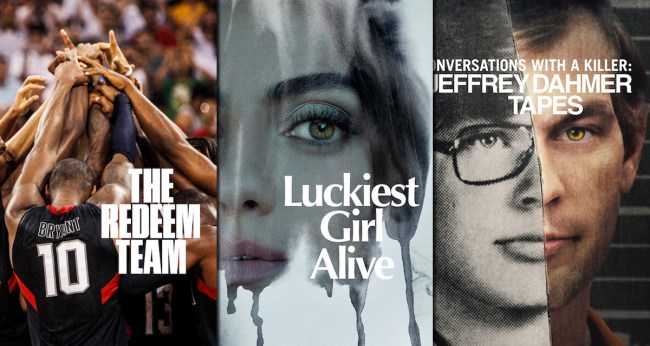 What did everyone do before the internet and all of these awesome streaming services? What did people do back in the day? Good thing we don’t have to worry about that because Netflix just released their list of what’s new for the month of October (as well as what will be leaving the service).

Some highlights of what’s new on Netflix in October include The Redeem Team, Luckiest Girl Alive, The Good Nurse, Big Mouth, Unsolved Mysteries and Conversations with a Killer: The Jeffrey Dahmer Tapes.

• Using unprecedented Olympic footage and behind-the-scenes material, The Redeem Team tells the story of the US Olympic Men’s Basketball Team’s quest for gold at the Olympic Games Beijing 2008 following the previous team’s shocking performance four years earlier in Athens. The documentary offers a fascinating portrait of team building and features insightful interviews with athletes and coaches from Dwyane Wade and LeBron James to Mike “Coach K” Krzyzewski, who reflect on how The Redeem Team set a new standard for American basketball.

• Luckiest Girl Alive centers on Ani FaNelli, a sharp-tongued New Yorker who appears to have it all: a sought-after position at a glossy magazine, a killer wardrobe, and a dream Nantucket wedding on the horizon. But when the director of a crime documentary invites her to tell her side of the shocking incident that took place when she was a teenager at the prestigious Brentley School, Ani is forced to confront a dark truth that threatens to unravel her meticulously crafted life.

• The third in a series from director Joe Berlinger (CWAK: The Ted Bundy Tapes, CWAK: The John Wayne Gacy Tapes), Conversations with a Killer: The Jeffrey Dahmer Tapes features never-before-heard audio interviews between Dahmer and his defense team, delving into his warped psyche while answering these open questions of police accountability through a modern-day lens.

Better hurry though on some other titles, because despite all everything that’s new on Netflix in October, several shows and movies like Schitt’s Creek, Ferris Bueller’s Day Off, Johnny Mnemonic and Friday will be going to be going, going, gone in by the end of the month.

Check out the rest of what’s new on Netflix in October, as well as what’s leaving…

October 16
Dracula Untold
Toni Morrison: The Pieces I Am

October 27
Metallica Through The Never