9 Things To Do In New Orleans Right Now

New Orleans goes by many names: “The Big Easy,” “The Crescent City,” “Paris of the South,” and “The City That Care Forgot.” Whatever name you call it, you know you’re going to have the time of your life. Whether you visit N’Awlins during Mardi Gras and Fat Tuesday or in the summer for a bachelor party, New Orleans offers plenty of one-of-a-kind attractions. We’ll look at the best things to do, yummiest food to eat, and the sights you need to see in NOLA.

The scenic space, which was modeled after the famous 17th-century Place des Vosges in Paris, is home to many artists and artisans who display their work and wares. Jackson Square is where France turned over New Orleans to the United States on December 20, 1803. Inside St. Louis cathedral is awe-inspiring with spectacular paintings on the ceiling.

Brothels Bordellos And Ladies Of The Night Walking Tour

New Orleans is the birthplace of jazz, which started in the late 19th century. While much of the music centers around funk, blues, soul, and brass, you don’t have to be a jazz lover to enjoy the vibrant music scene in The Big Easy.

There are numerous outstanding venues to check out live music from big-name acts and up-and-coming musicians of all different genres. If you are interested in jazz, many of the jazz clubs are located on Frenchman Street.

You can check out the tiny Preservation Hall, which is a jazz institution and its BYOB. the Spotted Cat Music Club is known as the “quintessential jazz club of New Orleans.” You’ll want to go to Maple Leaf Bar on a Tuesday to see the Grammy-winning Rebirth Brass Band that has appeared on HBO’s Treme.

Get some tasty tapas and jazz at Three Muses. Siberia Lounge is a dive bar with live shows and Slavic food. Great acoustics and even better blues and jazz await you at D.B.A.

Tipitina’s is dedicated to legendary blues pianist Professor Longhair. Go see a zydeco band at the Blue Nile. Every Thursday is an 80s dance party over at One-Eyed Jacks. Meanwhile, Maison has a Latin dance party on Fridays and is a nightclub on Saturdays. You’ll definitely want to hit up Rock ‘n’ Bowl where you can enjoy a live band while bowling.

From Cocktails to Jazz – Drink and Music Tour in New Orleans

RELATED: 9 Things To Do In Nashville Right Now

New Orleans has no shortage of alcohol, whether it be Huge Ass Beers, Giant Ass Beers, hurricanes, and hand grenades. The multitude of overly sugary adult beverages with very cheap liquor is almost shocking and potentially treacherous. You need to use discretion when consuming these hangover-inducing drinks because you do not want to have too many. If you want more sophisticated drinks we have some recommendations for some of the best bars in New Orleans.

Sip on a smokey Anderson Old Fashioned at Madam’s Modern Kitchen + Bar with Old Forester Bourbon and bitters; garnished with peanuts and Cracker Jacks. Grab a 25-cent martini at Commander’s Palace weekdays between 11:30 am and 3 pm. Tucked inside the Hotel Monteleone is The Carousel Bar, a bar that is an actual carousel that actually moves, but not too fast because you wouldn’t want to spill your Sazerac.

You’re going to want to take in the sights from above, so go to these great rooftop bars: Hot Tin Bar, Vue, and Monkey Board.

New Orleans has a magnificently tantalizing food scene with brilliant Cajun, Creole, Southern, and Italian influences. You need to have gumbo, so why not got to the award-winning Gumbo Shop. Another Creole staple is etouffee and for that dish you should go to Café Amelie or Royal House.

Start with scrumpyious chargrilled oysters with Crystal hot sauce and garlic parmesan butter at Madam’s Modern Kitchen + Bar and then get the perfectly cooked Gulf catch of the day with olive giardiniera and Brabant potatoes. Bring a nice outfit with you to New Orleans because Commander’s Palace has a dress code. You’ll want to get the turtle soup and the delectable New Orleans Barbecued Gulf Fish.

Caribbean and Creole cuisine is taken to another level at Compère Lapin where you’ll drool over the curried goat and sweet potato gnocchi. An incredible dish that you never knew you needed in your life is the shrimp and alligator sausage cheesecake from Jacques-Imo’s Cafe. Don’t even think twice because it is delicious. Get the Pig Mac from Cochon Butcher and thank me later.

You’re going to need to get a po’ boy if you’re in New Orleans and some of the best are at Killer Poboys, Parkway Bakery & Tavern.

Another must-get in New Orleans is a muffuleta sandwich. For the olive-y, meaty sandwich go to Napoleon House and Central Grocery & Deli. Can’t go to New Orleans without having crawfish or oysters, run, don’t walk to Harbor Seafood & Oyster Bar.

If you’re looking for crispy, moist fried chicken head on over to Willie Mae’s Scotch House or Willa Jean and then get their wonderfully sophisticated take on cookies and milk for dessert. For vegetarians and vegans, go to Domenica for the roasted cauliflower with whipped feta.

A great breakfast spot is Apolline Restaurant. Another fantastic breakfast place is Elizabeth’s Restaurant where they serve praline bacon.

No vacation in New Orleans would be complete without a visit to Cafe Du Monde for sugary beignets and cafe’ au lait. Want more sweet treats? Head on over to Sucré for one of their award-winning eclairs. Indulge in the bananas foster over at Brennan’s. Get any donut or baked goods from District Donuts Sliders Brew. You can get sweet praline beignets at Loretta’s.

RELATED: 9 Things To Do In Charleston Right Now

A post shared by The Old Absinthe House (@oldabsinthehouse)

Bourbon Street is the place to be because it is a non-stop party and is pulsing with energy. Bourbon Street, which dates back to 1718, is in the heart of the French Quarter and there is no shortage of booze or entertainment. If you get up early enough in the morning or just never go to sleep and walk down Bourbon Street, you’ll see workers powerwashing the road. That is because Bourbon Street gets its fair share of bodily fluids spilled upon from all of the fun that was had and all of the many hand grenade drinks that were consumed.

Lafitte’s Blacksmith Shop does not forge steel, but they serve a mean Voodoo Daiquiri and “purple drank.” The building was constructed in 1732 and is the oldest structure used as a bar in America. The bar is named after Jean Lafitte, who was a privateer, spy and pirate in the late 1700s and had an incredibly interesting life. Visit the Old Absinthe House that dates back to 1806 and hosted famous patrons such as Oscar Wilde, P.T. Barnum, Mark Twain, General Robert E. Lee, and Franklin Roosevelt.

Enjoy a live jazz band at Maison Bourbon, which is one of Bourbon Street’s oldest live jazz clubs. If you’re looking for a break from the madness on Bourbon Street, duck inside The Jazz Playhouse, a jazz club owned and operated by trumpeter great Irvin Mayfield.

Go sing your best cover of Natalie Imbruglia’s Torn at the Cats Meow said to be “the best karaoke bar in the world.” There is Larry Flint’s Hustler Club for a titillating good time. You can choose from up to 135 different tequilas over at Rita’s Tequila House.

The most important thing to do on Bourbon Street is to people watch because there is nothing quite like it on the planet. Walking down the street is so surreal because your body is experiencing a sensory overload.

You’re sense of balance is struggling after that ill-advised third Hurricane from Pat O’Brien’s Bar. Your ears are overwhelmed because there is music and sounds of people screaming from every direction. You’re eyes don’t know where to look because of the bizarre outfits, roving bachelorette parties, and it feels like your living inside the Tron: Legacy movie because there is neon lights everywhere. Your taste buds are bathing in all of the extraordinary flavors of NOLA.

GO ON A GHOST TOUR!

Take a spooky trip back in time to learn the haunted history The Crescent City with a ghastly ghost tour. Learn about the infamous Voodoo Queen of New Orleans Marie Laveau and even visit cemetaries if you dare.

New Orleans’ City of the Dead Cemetery No. 1 Tour

Ghost and Vampire Walking Tour Of The French Quarter

RELATED: 9 Things To Do In Austin Right Now

GO ON A STEAMBOAT!

Imagine yourself back in ye olden times and you’re navigating the mighty Mississippi River in style — on a steamboat. Don’t imagine, you can traverse the Mississippi River in luxury while dining on brunch or dinner with a jazz band playing on a traditional paddle-wheel boat.

GO ON A SWAMP TOUR!

Leave The Big Easy to experience the Louisiana bayous and wildlife with a swamp tour. Take a boat or airboat to see gators and other animals in their preserved wetlands. Plus you’ll learn about Cajun history and culture during your educational journey. 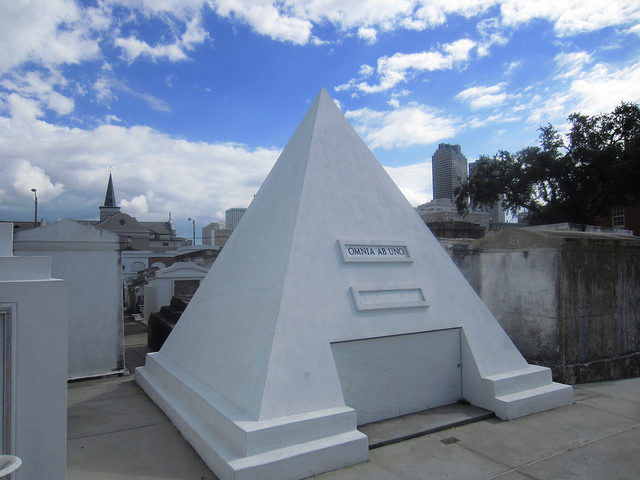 Inside the cemetery, there are tens of above-ground vaults from the 18th and 19th centuries, but one stands out. There is a 9-foot-tall pyramid-shaped tomb with the words “Omni Ab Uno” inscribed on it. The words are Latin for “Everything From One.”

In 2010, Cage purchased the crypt and it is supposed to be his final resting place. There is a theory that Cage selected a pyramid tomb as a reference to National Treasure. There is another rumor that Cage picked a pyramid because the Hollywood actor is a member of the Illuminati.

RELATED: 9 Things To Do In Denver Right Now