9 Things To Do In Charleston Right Now 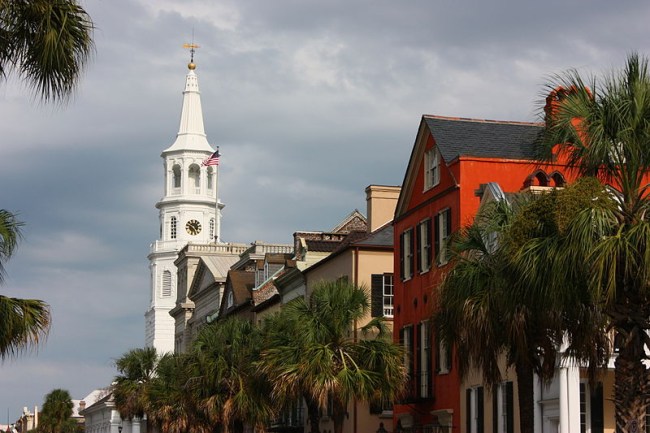 For the sixth year in a row, Charleston was named as the No. 1 U.S. city by Travel + Leisure readers. Charleston also made Travel + Leisure’s World’s Top 15 Cities, the only U.S. city to make the cut in 2018. These are certainly deserving accolades considering the wealth of activities, history, Southern charm, and culinary delights this one-of-a-kind city offers. 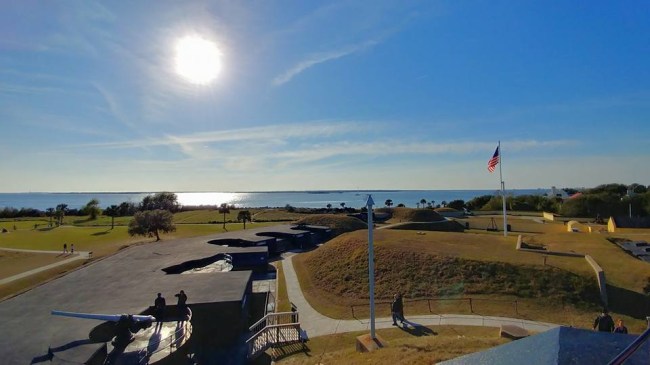 Charleston was originally settled in 1670 and since then it has been the location of numerous crucial historical events that have shaped this great country. Charleston was once the hub of the Atlantic trade and one of the wealthiest cities in the American colonies. In 1774, representatives from all over the colonies came to the Exchange and Custom House to elect delegates to the Continental Congress, the members would later draft the Declaration of Independence.

There were over 135 engagements that took place in South Carolina during the Revolutionary War, more skirmishes than all of New England. On June 28, 1776, colonial forces at Fort Moultrie (which you can visit) in Sullivan’s Island survived an onslaught from British ships and armies. The incomplete base was able to withstand the pounding because the palmetto trees were flexible and able to withstand cannonballs. That is why the palmetto tree is on the South Carolina flag. The first shots fired in the American Civil War happened on April 12, 1861, at the island base of Fort Sumter that protected Charleston. 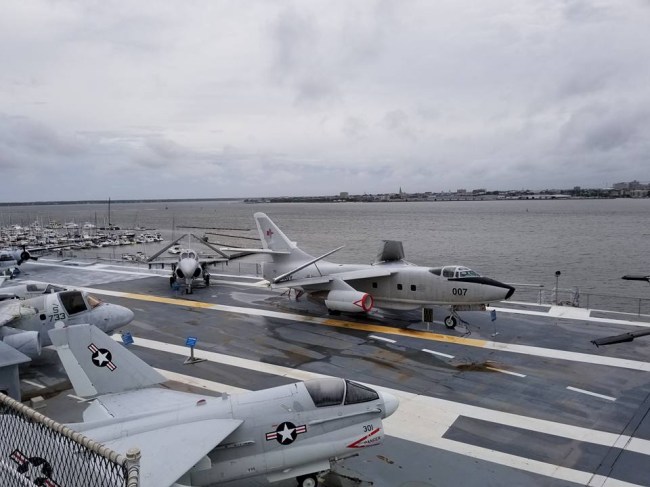 Speaking of history you should definitely make the trip to Patriots Point, the home of the now-retired USS Yorktown aircraft carrier. This Essex-class aircraft carrier served valiantly in World War II and the Vietnam War. Across the Cooper River in Mount Pleasant sits this floating naval military museum that is home to 28 naval aircraft. There is also the USS Laffey, a WWII destroyer that took part in the D-Day invasion and the battle of Okinawa. You can also go inside the Balao-class USS Clamagore submarine that was built during World War II. Patriots Point is also home to the only Vietnam Experience Exhibit in the United States, the Medal of Honor Museum, and where you take a ride in a replica Apollo 8 capsule, which the USS Yorktown was the recovery ship for the Apollo 8 space mission in 1968.

I’d put the Charleston restaurant scene up against any other city. Every place you eat in Charleston the food tastes like the chef cooks the same food for their family with the same amount of love, consistency, and dedication. This extensive list of best places to eat in Charleston could have been quadruple the size as it is now and it was difficult to leave off some favorites.

Get anything from Magnolia’s and your stomach will be very happy, but if I had to pick one thing I’d say go with the shellfish and grits. FIG has won multiple James Beard Foundation Awards over the years and you should order everything off the menu, but must-haves are the ricotta gnocchi alla bolognese and the fish stew provencal. DUCK FAT FRIES! Get these heavenly treats and the duck fat BLT at the Tattooed Moose. Everyone loves chef Sean Brock’s Husk and his other tasting menu restaurant McCrady’s. Get the bone marrow bread pudding from the Macintosh and thank me later. If you are craving steaks the obvious place to go is Hall’s Chop House. Get any raw seafood or the lobster roll from 167 Raw (Expect a wait). Get a crazy bang for your buck at Nana’s Seafood with huge portions of garlic blue crab and shrimp on the cheap. If you’re not familiar with pimento cheese, you are missing out and you will learn to love it in Charleston. Get the pimento cheese fritters at Poogan’s Porch. Slightly North of Broad AKA S.N.O.B. is another place to get shrimp and grits because that is what you get in Charleston.

It’s not all Southern fare in Charleston. Want to the best Greek food in your life? Eat at Stella’s. Le Farfalle goes to uncommon heights with their take on Italian food. Start with the octopus carpaccio and end with the squid ink linguine with jumbo lump crab, jalapeno pesto, and garlic crema. Cru Cafe features an eclectic menu that is sure to have something for everybody.

For brunch, head on over to Hominy Grill (Another James Beard Award-winner) and indulge in the rich and hearty Charleston Nasty Biscuit smothered in decadent sausage gravy. Another perfect breakfast spot is Eli’s Table, make sure you get a bloody Mary and the shrimp and grit benedict. If you’re on your way to the beach, hit up Page’s Okra Grill for a hearty brunch that will fuel your day. A trip to Charleston isn’t complete unless you get one of the scrumptious biscuits from Callie’s Hot Little Biscuit.

Rodney Scott does barbecue right and it’s all he’s been doing since he was a kid. It’s no wonder that Scott won a James Beard Award two months ago. Get the fall-off-the-bone spare ribs Rodney Scott’s Whole Hog BBQ, definitely the cornbread, and banana puddin’. John Lewis, the pitmaster from Lewis Barbecue is from Austin, Texas, and brings his BBQ expertise to Chucktown. Ask the server for every kind of meat (don’t sleep on smoked turkey) they have and then experience pure barbecue bliss. If you want more barbecue, Swig & Swine, Home Team BBQ (try the smoked wings with white Alabama sauce), and Smoke BBQ all offer finger-licking delicious barbecue that will give you happy meat sweats.

For lunch head on over to Brown Dog Deli for an assortment of unique sandwiches, but my favorite is the Pig n’ Fig with pulled pork, fig-rosemary preserves, bacon jam, cheddar, and Granny Smith apple on a pressed baguette. Five Loaves Cafe is another A++ lunch spot with awesome sandwiches and salads. Butcher & Bee has fresh-baked bread for you to dip in their magnificent whipped feta.

For dessert go to Peninsula Grill and get their world-famous towering 12-layer coconut cake. Get a decadent Tollhouse Chocolate pie from Kaminsky’s and wash it down with a wonderful Wells & Young’s Banana Bread beer. Grab a gopher from the Savannah Candy Kitchen.

Go back to the 1920s and get served the finest hand-crafted cocktails in the Holy City at Prohibition. Definitely indulge in their fantastic old fashioned cocktails and Manhattans. If you want wonderfully prepared adult beverages or a superb selection of refreshing beers, plus delectable appetizers to enjoy then go directly to Edmund’s Oast. Get an oyster shooter or five from Pearlz. Drop by High Cotton for the finest espresso martini of your life.

There’s a number of tremendous breweries in Charleston including Frothy Beard Brewing, Palmetto Brewery, Revelry Brewing, Holy City Brewing, and Ghost Monkey Brewery. There’s also a great selection of distilleries where you can take tours and sample their spirits including Charleston Distilling Co., High Wire Distilling, Striped Pig Distillery, and Firefly Distillery which is about 45 minutes outside the city.

There are over 15 golf courses within 20 miles of Charleston so you will have plenty of options. You have the Tom Fazio’s first course, Links Golf Course at Wild Dunes in Isle of Palms, that is right on the ocean. There’s also the Shadowmoss course that Golf Digest calls “the best golf value in Charleston.”

But the #1 golf course in the Charleston area and one of the best courses in the country is The Ocean Course at Kiawah Island. Designed by Pete Dye, this course was home to the 1991 Ryder Cup and will host the 2021 PGA Championship for the second time in 2021. The Ocean Course was named as “the toughest course in America” by Golf Digest and was featured in the 2000 movie The Legend of Bagger Vance starring Will Smith, Matt Damon, and Charlize Theron. If you don’t make it to The Ocean Course, Kiahwah Island has seven award-winning golf courses designed by legends such as Jack Nicklaus and Gary Player.

There are five beaches near Charleston that each has their own distinct vibe. You have Isle of Palms with a few bars and restaurants right on the beach, but has a very family feel. There is Sullivan’s Island that has Fort Moultrie and a very quaint main street featuring very scrumptious food options from burgers at Poe’s Tavern, barbecue at Home Team, or great pizza at Obstinate Daughter. Folly Beach, which has a very Bohemian aura, features Morris Island Lighthouse and the East Coast’s second-largest fishing pier where they have tournaments. Kiawah Island is home to seven award-winning golf courses, a local shopping village, and a world-class resort. Lastly, there is Seabrook Island which has rental properties situated in nature where you could see alligators, sea turtles, and bobcats. 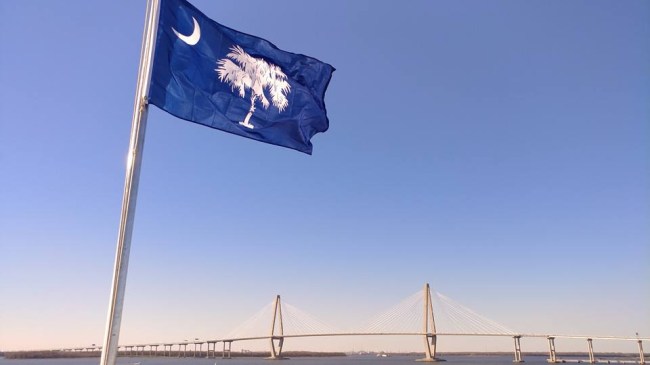 There’s nothing better than getting out on that open water and having the salty wind blow through your hair. Charleston is on a peninsula with the Ashley and Cooper Rivers on both sides and the Atlantic Ocean near, plus there numerous smaller waterways so there’s so much of the Lowcountry to explore by boat. Whether you want to check out the dolphins frolicking in the water or want to see history such as visiting the island military base of Fort Sumter, a boat tour gives you a scenic perspective. The Charleston Water Taxi will take you from the harbor to Patriots Point. Some of the top Charleston boat tours include Charleston Harbor Tours, Fort Sumter Tours, Adventure Harbor Tours, and Schooner Pride. You can always look on TripAdvisor and find a deal for boat tours in Charleston.

There are so many options for fishing in the Charleston area. Whether you want to go fishing in a marsh, off a pier in the intercoastal waterway or in the ocean, there’s something for everybody. Here are some charters in Charleston: Lowcountry Outdoor Adventures, Charleston Charter Fishing, Absolute Reel Screamer Charters, and Exclusive Fishing Charters.

There are breathtakingly beautiful gardens near the Southern jewel that is Charleston. You can visit Magnolia Plantation and Gardens, which is named as one of “America’s Most Beautiful Gardens” by Travel + Leisure. This massive 464-acre garden was founded in 1676 and opened to the public in 1870, making it the oldest public garden in America. Besides offering magnificent gardens to visit there is also the Slavery to Freedom exhibit that spotlights how Gullah slaves once lived. There is also the Audubon Swamp Garden where you can see a variety of wildlife living in their natural habitat. Alligators lay like logs in the murky water as families of egrets and herons make their nests in cypress trees. Another picturesque garden is Middleton Place that was built in the mid-1700s and has large wonderfully landscaped grounds and stunning views of the Ashley River.

One last activity to do in Charleston is to look for Bill Murray, who lives in the area and co-owns the Charleston RiverDogs minor league baseball team. If Charleston isn’t your thing, here are the top nine reasons you should go to Nashville right now and the nine best attractions in Denver.