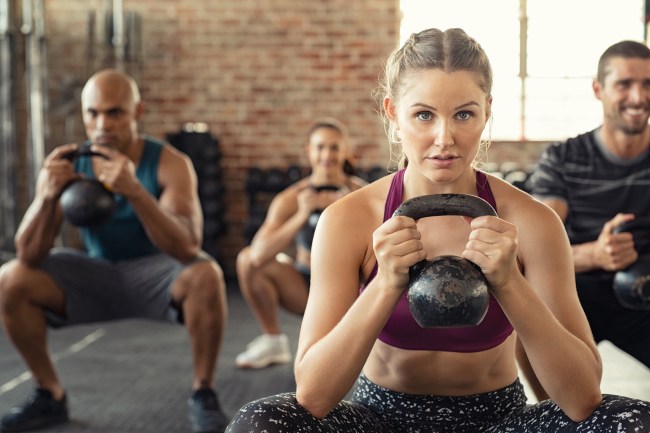 The first thing I purchased when the curtain fell was a kettlebell. Before groceries, before the Peloton, before both fleshlights (Slip ‘n Slide & Chunnel 2), I bought my kettlebell. It was a tough decision, too. Do I go with the 65-pound monster, so I don’t run into a ceiling once I’ve built up the muscle groups required to wrestle such a beast? It would certainly limit me in the near term, as humbly, I’m not strong enough to do Turkish getups with 65 pounds. Or do I go lighter—say 35 pounds—broadening the exercises I could do now but potentially limiting me once I outgrow and outbulk such a puny clitoral piercing? Decisions, decisions.

In the end, I opted for a 55-pounder. It seemed like the middle ground. Boy was I wrong. The magic of a kettlebell is that it enables a huge spectrum of lifts. With 55 pounds, I have access to about four: swings, deadlifts, squats, and maybe lunges depending on breakfast. Shoulder presses are barely possible, and terrifying. I should probably research more exercises, but in choosing from my library of KB experience, it’s a small selection.

But hey, it could be worse. At least I HAVE a kettlebell, because I was proactive and motivated and care about fitness enough to see the drought coming. Unlike most people in the tri-state area…

NY Times– “It’s pandemonium,” said Ed Pryst, the chief sales officer of Gym Source, a New Jersey-based workout equipment retailer with several offices in New York. “I’ve been in the business for 30 years and I’ve never seen anything like it.”

In recent weeks, Mr. Pryst said, when he visited closed Gym Source locations in New York preparing for reopening, he would encounter passers-by tapping on the storefront glass, asking about kettlebells.

And while all kinds of equipment has been hard to come by, the most difficult item to find, in New York or elsewhere, is a kettlebell.

On the Dick’s Sporting Goods website in May, kettlebells — iron, weighted balls with handles attached — were not available within 100 miles of New York City.

Pandemonium, folks. Not a kettlebell in sight for 100 miles. Not even one of those baby 10-pounders you find at elder care facilities or in the living rooms of expecting mothers. I’ve heard that plane crash survivors who stumble through the dessert for days without water will hallucinate oases and springs, only to see them disappear into more sand, more sand, endless sand. Are the juiced-out gorillas of the Jersey Shore suffering a similar fate? Are there armies of fitness influencers trekking from Planet Fitnesses to Lifetimes, hallucinating racks of kettlebells, all shapes and sizes?

Thank God I’m not out there. I look forward to tucking myself in tonight, with my sheets locked in by the comforting weight of my 55-pound friend.