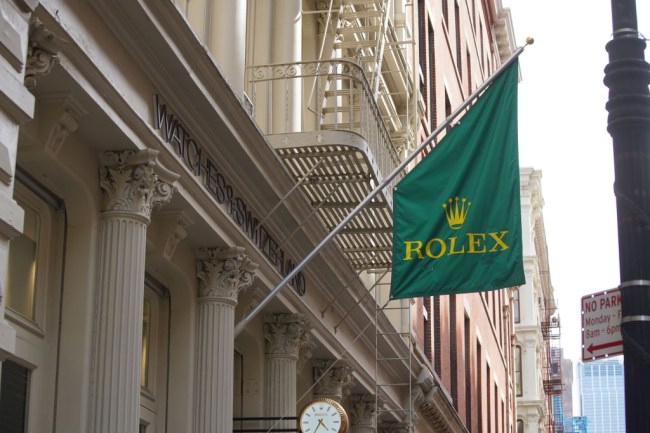 UPDATE (June 3): The original NY Post story has been updated with a quote from the Rolex store’s spokesperson claiming that the store was actually empty, there were no watches in the store: “no watches of any kind were stolen, as there weren’t any on display in the store. There were simply windows broken and some vitrines smashed.”

Looters took to SoHo in Manhattan late Sunday night and broke into a number of businesses including a Rolex store and swiped $2.4 million worth of watches, according to the New York Post.

Video shows throngs of people making their way through the front door of the Greene Street store before fleeing a short time later.

“The Rolex store is empty,” a police source said. “They stole like $2.4 million in Rolexes.”

NYPD Deputy Commissioner John Miller said outside “agitators” with ties to anarchist groups were using the George Floyd protests to loot and spark violence between cops and demonstrators.

The cleanup is underway in SoHo. Incredible how many stores, banks, & coffee shops were robbed. Seeing a lot of places now getting boarded up in anticipation of more looting. pic.twitter.com/OlVabbKgQb

The Apple store, Nike, Chanel, Lululemon, and other shops in SoHo, as well as coffee shops, chain drug stores, and other businesses around New York City, were damaged and/or looted on Sunday night as well.