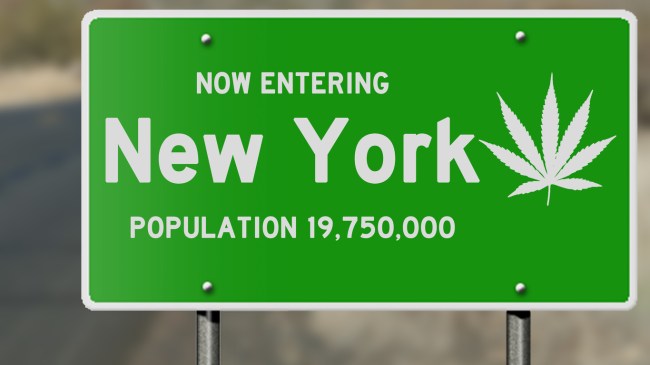 Although New York Governor Andrew Cuomo was resistant at first to the idea of allowing marijuana to become a part of statewide commerce, it now appears he has changed his tune. Earlier this week, Cuomo announced that the leafy green substance that has allowed law enforcement all across the state to crack the skulls of minorities, seize property that wasn’t theirs and avoid giving the proper attention to violent crime is on its way to becoming legal in a manner similar to beer. All that has to happen before the state can join the ranks of nine others in legalizing marijuana for recreational use is for an appointed team to bring this reform to life through legislative channels.

It was just last month that the New York Health Department released a report stating, “The positive effects of a regulated marijuana market in New York State outweigh the potential negative impacts.” The 74-page report, which was commissioned by Cuomo back in January, suggested that it would be a wiser move to legalize marijuana for recreational use rather than continue to fight it on the black market.

Some of the befits of treating weed like alcohol, the report states, includes a tax haul of $700 million while not creating any additional addiction turmoil for the citizens. One of Cuomo’s primary arguments against legalization over the year has been that it is a “gateway drug,” which he was concerned would turn the state into a legion of junkies. But that is not likely to happen. In fact, the report finds that legal marijuana might even help people find a release from the grips of opioid addiction. It suggests that chronic pain patients may use cannabis products as an alternative to prescription painkillers.

But the study authors also said that in order for marijuana legalization to work, the state would need to develop a “well-thought-out” regulatory system that includes a focus on education that would warn the public about the potential hazards of using the herb.

“It is imperative that a regulated marijuana program contain all necessary safeguards and measures to limit access for individuals under 21, minimize impaired driving, provide education and tailored messaging to different populations, and connect people to treatment if needed,” the report reads.

It seems the Health Department’s findings were all Governor Cuomo needed to go all in with respect to legal weed. The former naysayer of the nug now says, “As we work to implement the report’s recommendations through legislation, we must thoroughly consider all aspects of a regulated marijuana program, including its impact on public health, criminal justice and State revenue, and mitigate any potential risks associated with it. I thank the members of the workgroup for their time and expertise as we work to craft a model program.”

In other words, weed will be legal in New York for adults 21 and over soon, just let my 20-member team work out the details and see if we can get the legislature to buy into it.

Cuomo, who is running for a third term, has known for sometime that the state would eventually need to legalize marijuana. Neighboring Massachusetts has had a recreational pot law on the books since 2016, and across the way, in New Jersey, Governor Phil Murphy has pledged to make recreational reefer a way of life. Cuomo admitted earlier this year that once those markets are full swing there would be no way of preventing pot from tricking in to New York “because you can go over a bridge and over a border.”

The legalization of marijuana in New York State is likely inevitable. Our city has to get rules in place before this happens and be prepared for the public safety, public health and financial impact. pic.twitter.com/5y40VlYhjG

So what happens next?

Cuomo’s marijuana legalization bill will be introduced to the State Legislature in the next session – that happens at the beginning of January 2019. It remains to be seen, however, exactly what the proposal will look like or how it shake out once state lawmakers get their hands on it. Still, marijuana advocates are enthusiastic about the Governor’s decision to lead a wrecking crew in the dismantling of New York’s prohibitionary standard.

“After years of feet dragging, it is encouraging to see movement on marijuana legalization in New York State,” NORML Executive Director Erik Altieri said in a statement.

“Around 23,000 individuals are arrested in the Empire State every year, overwhelmingly individuals of color, and it is long past time for that practice to end,” he continued. “Governor Cuomo needs to use his bully pulpit to expedite this process and get a legalization bill through the state legislature as soon as possible, maybe then his state can finally cease to be home to the marijuana arrest capital of the world and the entire state can begin to benefit from a system of legalization and regulation.”