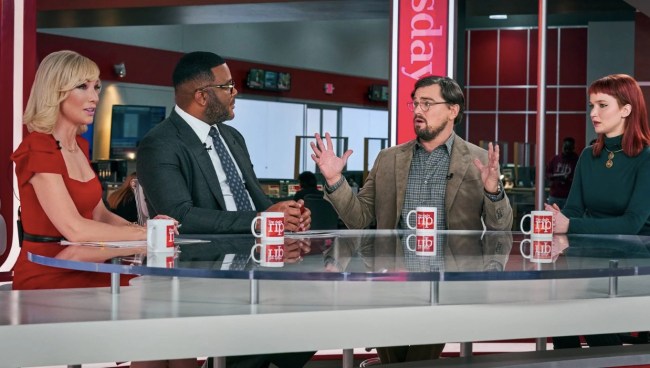 Don’t Look Up was alright. Maybe a 6/10. Definitely a perfect “watch with your family over the holidays” movie, which is exactly what it was. My boomer parents certainly enjoyed it more than I did. It certainly wasn’t a worth Best Picture nominee, that’s for sure. But then again, that’s what happens when you’ve got a project filled with as much talent as this one: sometimes the powers that be throw you a bone just ’cause.

If there’s one thing Don’t Look Up certainly nailed, though, it’s the alarming negligence of some “news anchors” when discussing climate change, as evidenced by this massively viral clip that shows two British TV hosts acting exactly like Cate Blanchett and Tyler Perry’s twisted characters.

A clip from Don’t Look Up, and then a real TV interview that just happened pic.twitter.com/CokQ5eb3sO

Perhaps it’s something that began with the millennial generation, but whether it be climate change or nuclear war or alien invasion, I’m of the opinion that — if I live long enough — I’ll be around to see the end of the world. That’s how severely my 29 years on this planet have ground out any sense of faith I have in this misguided species of hours. Sorry to get to headily depressing on you on a beautiful Thursday in the summer, but it’s the truth.

If you didn’t particularly enjoy Don’t Look Up, I have a feeling you’ll be all in on Leo’s next film, as he’s starring in Martin Scorsese’s Western crime drama Killers of the Flower Moon alongside Robert De Niro and Jesse Plemons later this year.

RELATED: ‘Don’t Look Up’ Has Ruined A Nearly Decade-Long Streak Of Critical Hits For Leonardo DiCaprio