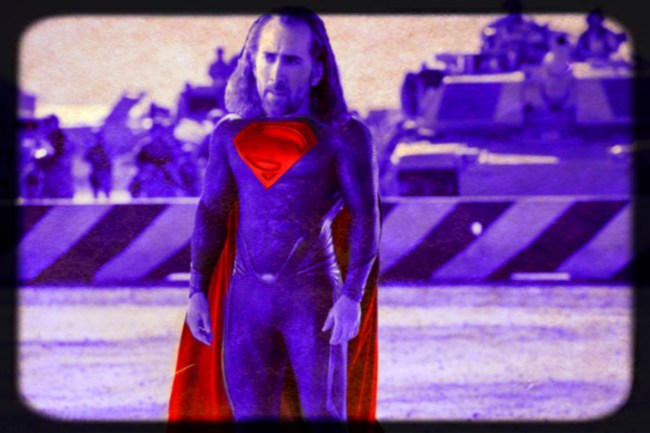 Back in the late 90s, there was a period of time where Nicolas Cage — whose son is named Kal-El, by the way — was set to play Superman in a reportedly gonzo film directed by Tim Burton, who had helmed the groundbreaking Batman franchise a decade prior.

While the Cage-starring Superman film never came to fruition, the project has become the stuff of internet legend all the same as videos and photos of Cage trying on the iconic suit can still be found out there on the world wide web.

During a recent interview with GQ, Cage was actually asked about his brief stint as Superman and whether or not it could happen in the future, and Cage’s answer was quite intriguing, to say the least.

is this dude going to be in The Flash???

perhaps he will be in the Keaton Batman universe since Tim Burton would’ve directed both heroes? https://t.co/ItzXhbsnIo

With Michael Keaton’s Batman set to return in The Flash (which was recently delayed from November 2022 to June 2023), Cage’s comments have left some fans speculating that he could appear as the Tim Burton universe Superman in the film, too.

SO YOU’RE TELLING ME THERE’S A CHANCE pic.twitter.com/8RuktGUPKP

Nick Cage hints that he COULD appear in "The Flash" as Superman. Every Cage fans live in a very exciting period right now ! https://t.co/B2lpPt2MPG

WHAT IF HE APPEARS AS SUPERMAN IN THE FLASH????? pic.twitter.com/OKm3Y2G175

Apparently this was supposed to be the Superman in Burton's Batman universe. They've since brought back Michael Keaton's Batman so...

Even if Cage doesn’t appear as Superman in The Flash, the film will still be jam-packed with heroes as it’s set to feature Keaton’s Batman, Ben Affleck’s Batman, two versions of Ezra Miller’s Flash, and newcomer Sasha Calle as Supergirl. At this time, The Flash is scheduled to hit theaters in the United States on June 23, 2023.