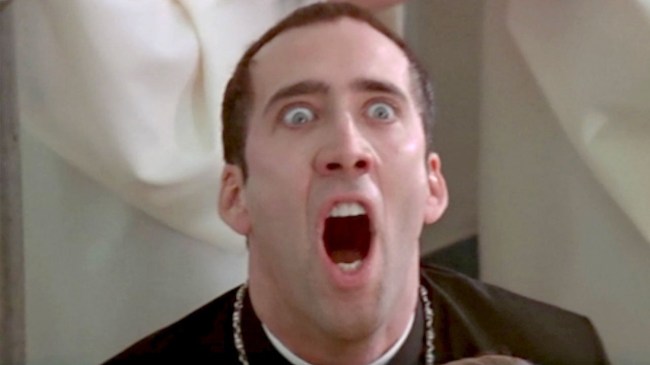 You pickin’ up what I’m puttin’ down in that absolutely and purposefully outrageous title? I’ll elaborate.

Academy Award-winning actor (did you know that? I bet you didn’t — but it’s true! Cage took home the Oscar for Best Actor for his work in Leaving Las Vegas back in ’96) Nicolas Cage will be playing himself, Nicolas Cage, in an upcoming film titled The Unbearable Weight of Massive Talent.

And, according to reports, in The Unbearable Weight of Massive Talent, Cage will be “reenacting” famous scenes from past Nicolas Cage movies. Talk about an absolute mind fuck.

Speaking to Empire, Cage opened up about the film and his tailor-made role. “It’s a stylized version of me, and the fact I even have to refer to myself in the third person makes me extremely uncomfortable,” he says. “There are many scenes in the movie where modern or contemporary – here we go – ‘Nic Cage’ and then young ‘Nic Cage’ are colliding and arguing and battling it out. It’s an acrobatic approach to acting.”

Invoking a younger Cage means that the actor will be doing something he rarely does – revisiting his previous movies, with the possibility that Gormican’s film might do the same. “I don’t like to look back,” he explains. “But this movie kind of pushes it all back in my face. I’m probably going to have to look at a couple of the movies from the past again, because I think we’re gonna have to reenact some of those sequences. It’s like walking through a Cabinet Of Dr. Caligari version of Con Air and Face/Off.” [via  Empire]

Lionsgate, the studio behind the bonkers film, has confirmed that The Unbearable Weight of Massive Talent — which sees Cage “saddled with mounting debt, agree to a gig attending a Mexican billionaire’s birthday party, only to discover that the billionaire is actually a cartel boss who has kidnapped the daughter of a prominent presidential candidate” (via Collider) — will hit theaters on March 19, 2021.

In the meantime, kindly enjoy this electric four-minute-long montage of Cage absolutely losing his shit. It’s worth every second.