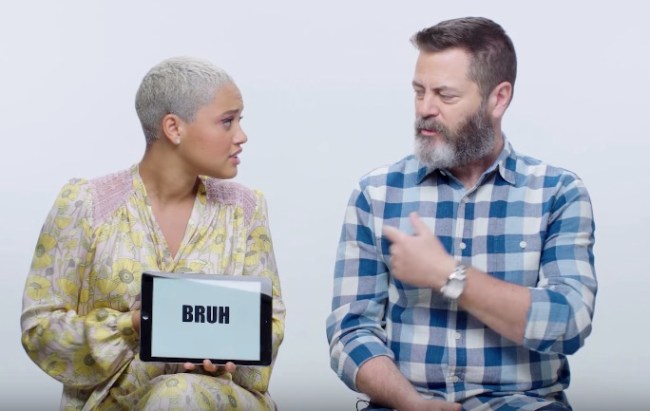 Nick Offerman landed the role of a lifetime on Parks and Recreation playing Ron Swanson. It was equal parts life imitating art and vice versa. There’s no doubt in my mind that playing Ron Swanson allowed Nick to become more of the man he is today but he’s always been a renaissance man. Who else in Hollywood has a woodshed out back stocked with some of the rarest woods on the planet? Nobody other than Nick Offerman, nobody.

Well, Nick’s got a new movie coming out soon named Hearts Beat Loud where he plays the dad in a father-daughter songwriting duo who are spending one last Summer together before his daughter leaves for college. The daughter is played by Kiersey Clemons, the actress in this clip below, who holds up signs of millennial slang and has Nick guess what it means. She then millennialsplains the slang for Nick and brings him up to speed:

Are we really expected to mean that Nick Offerman doesn’t now what ‘lit’ means? Also, I have to wonder how Gucci, one of the best-known high fashion brands in the world feels about their name being used as millennial slang to mean ‘all good’. They’ve spent decades building a luxurious brand only to see it tossed around in casual conversation. Sure, you 100% WANT everyone talking about your brand but do you want to be associated with the mundane? Do you want to be associated with Lil Pump? Probably not.