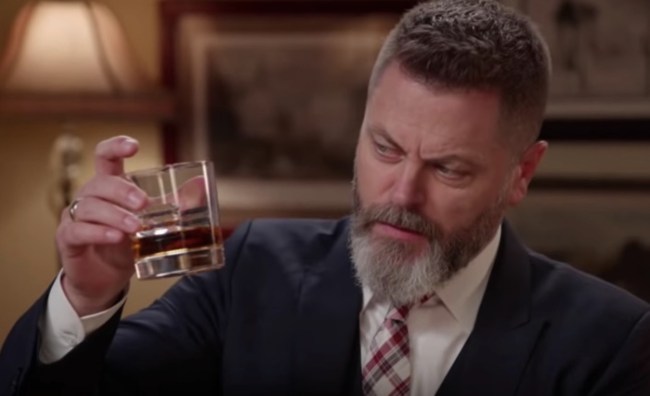 Nick Offerman is a man of the world. He played the character Ron Swanson on NBC’s Parks and Recreation and it was one of those ‘life imitates art’ situations where the world slowly discovered that Nick is Ron, and Ron Swanson is Nick Offerman. And that’s precisely what made Ron Swanson one of the greatest TV characters of the past decade.

Nick recently launched his own line of Lagavulin Islay Single Malt Scotch Whiskey, The Offerman Edition, which I’m very interested in trying. He’s also stayed active with tons of TV and Movie credits over the past few years like ‘Metalbeard’ in The LEGO Movie: Masters of Flight and voicing Varvatos Vex in 3Below: Tales of Arcadia.

Somewhere in his busy schedule, Nick found time to swing by Jimmy Kimmel Live for the ‘Three Ridiculous Questions’ recurring segment. If you’re not familiar with this segment, it’s exactly like it sounds. Jimmy asks the guest three completely outrageous questions and in this instance, since it’s Nick Offerman, the answers are amazing.

Jimmy asks Offerman what his best advice for any aspiring rapper would be, to which Nick offers some excellent advice. Jimmy also asks him who in Nick’s life would be most likely to get attacked by a bear. Check it out:

The question about having a tail has me a little fucked up in the head. At first, I was thinking I’d get that thing chopped off immediately. Who needs a damn tail? But if the tail is actually useful then why not keep it? If it was strong enough to dangle from a tree or hold me upright when I wanted to lean over a ledge, then hell yes I’m keeping that tail.

But if the tail’s just some furry appendage that doesn’t do shit but get in the way then I’m chopping that off immediately. Wouldn’t you?