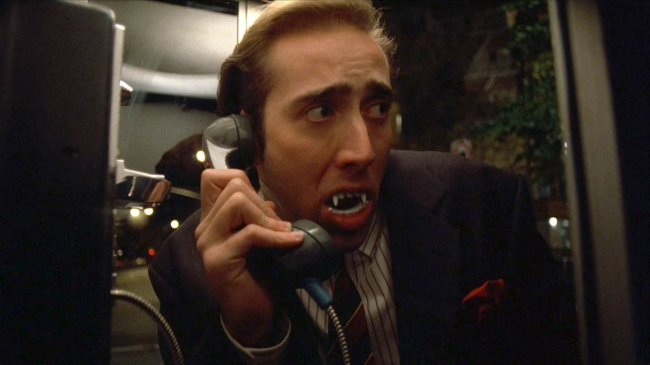 My guy Nicolas Cage is everywhere these days. Pig was one of the most well-reviewed movies of 2021 (it could also score him an Academy Award nomination for Best Actor, although I think he’ll justtt miss out), the trailer for his next film The Unbearable Weight of Massive Talent — in which he plays himself and recreates some of his most iconic roles — is incredible, and we just wrote a story about him hilariously describing the time a horse named Rain Man tried to kill him earlier this week.

On top of all of that, Cage has also been tapped to play Dracula in Universal’s upcoming film Renfield, which will also star Nicholas Hoult (Beast from the rebooted X-Men movies) and Awkwafina. And, perhaps unsurprisingly, Cage is apparently preparing for the role with his famously quirky Nic Cage intensity.

According to Deadline reporter Justin Kroll, Cage is “all in on the part and is supposedly watching every Dracula film studying how each actor walks and talks like the Count.”

RELATED: You Simply Must Watch Nic Cage Tell This Story Of The Time A Horse Named ‘Rain Man’ Tried To Kill Him

Just to give you an idea of how many Dracula movies and performances there are out there, IMDB has a list of the TOP 60 Dracula films ever made. 60!

As I mentioned above, the former Oscar winner will next be seen alongside Pedro Pascal and Tiffany Haddish in Lionsgate’s The Unbearable Weight of Massive Talent. The film follows Cage, “unfulfilled and facing financial ruin”, as he accepts an offer for $1 million to recreate his most iconic roles at the birthday party of a deranged drug lord. If that’s not a logline that sucks you in, I’m not sure what is.

The Unbearable Weight of Massive Talent will hit theaters in the United States on Friday, April 22.