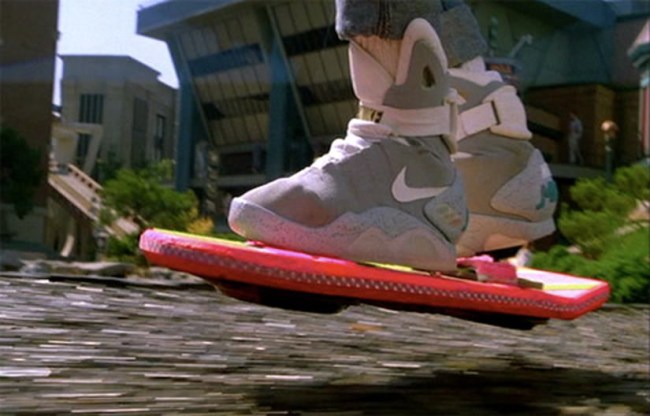 Even if some of its predictions were off by a few years, it’s pretty incredible how many of the aspects of the world portrayed in Back to the Future were pretty on point. We might not have magically transforming pizzas or hoverboards (besides the ones that spontaneously combust), but we do have iPads, a Cubs World Series victory, and— most notably— shoes that tie themselves. The Nike Mags Marty McFly rocked in the 1989 film instantly became as iconic as the puffy vest he wore in 1985 thanks to the power laces no one actually ever thought would exist until they actually did.

Based on their impressive legacy, I would argue that the Mags have rightfully earned a spot in the Movie Footwear Hall of Fame alongside Benny The Jet’s PF Flyers, the sneakers from Jumanji, and the shoes Lil’ Bow Wow found in Like Mike. Based on a recent auction, someone with way too much money would appear to agree with me, as one of the shoes from the movie just sold at auction for a price only the likes of Biff Tannen could afford.

According to Sole Collector, the left kick sold for $91,200 after a fierce bidding war on eBay came to a close. I don’t think there’s even a point on the shoe condition scale that can describe what terrible shape they’re in, but when you consider it’s been close to 30 years since the film came out, it shouldn’t be too shocking that they’re not exactly immaculate.

The original Nike Mag from Back to the Future Part II sold for $92,100 https://t.co/3G45if62Tz pic.twitter.com/lg4xFYemls

At least the seller was nice enough to include all of the pieces that have crumbled off. You should never underestimate the power of Krazy Glue.