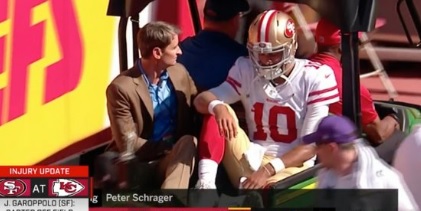 Niners franchise uarterback Jimmy Garoppolo left Sunday’s game against the Chiefs in the fourth quarter after his left knee appeared to buckle he attempted to scramble near the sideline.

Jimmy G carted off the field with a knee injury after going down on this play 😳pic.twitter.com/HbVr6FpDAU

Garoppolo was carted off the field and the team is now fearing that the injury to Jimmy G’s knee may be “serious”.

The #49ers fear a serious knee injury for QB Jimmy Garoppolo, I’m told. That’s what it appeared, as well, a non-contact knee injury that saw him carted off.

when you're in 4 fantasy football leagues and Jimmy G is your QB in all of em pic.twitter.com/ToqCYvdk3U

Jimmy G might have ended his season over an extra half a yard.