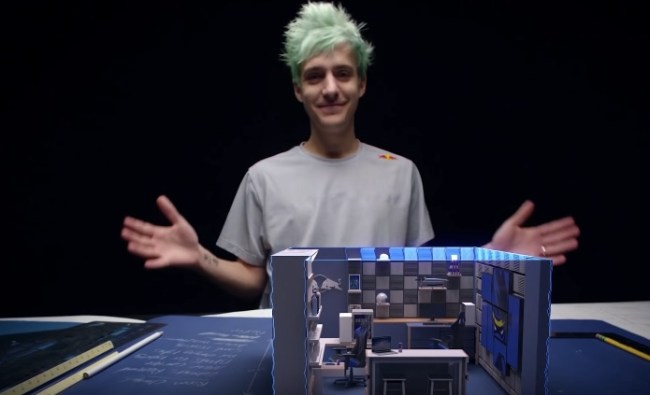 Tyler ‘Ninja‘ Blevins is currently the highest-paid gamer on the planet. He’s the most followed gamer on Twitch with over 11 million followers. Each stream averages more than 59,000 views with some doing astronomical numbers.

On YouTube, Ninja boasts 17 million subscribers and back in September it was reported that he was making more than $500,000 EVERY MONTH by streaming his Fortnite sessions. Even though a recent report suggested that Fortnite has already peaked the trends suggest otherwise.

Incredible stream in the new room

Ninja’s currently #2 on the overall Fortnite leaderboard with 4263 wins in 12,523 games. One spot behind /u/OvеlonUwatakashi who has 4796 wins in 12,600 games. He held that #1 spot for a lot of the time that Fortnite‘s been around but it’s hard being #1 when everybody’s gunning for you.

In his pursuit to regain that #1 spot, Tyler ‘Ninja’ Blevins might’ve just gained an edge in the form of his all-new gaming ‘dojo’ courtesy of his sponsor Red Bull. They just built him what might be the sickest custom gaming room on the planet and they released this short clip showing the process of building from start to finish.

Side note: is gaming the only place where it’s 100% acceptable for someone to give themselves a nickname?

Imagine going back in time to when the average American household only had like one television and try to explain to them Tyler ‘Ninja’ Blevins. A man who gets paid to play games on TV and has an entire connected room outfitted with multiple screens. It might take you a year to explain video games and the Internet, but then the idea that someone could get paid tens of millions of dollars each year to play video games would be unfathomable.

I think it’s safe to say that Ninja’s been living the dream for quite some time. He’s always had a sick setup when it comes to gaming but this new room is next-level. In September he was the first eSports figure to grace the cover of ESPN The Magazine and now this? Life’s good for Tyler.