‘NOPE’, The New Film From ‘Get Out’ Director Jordan Peele, Is Getting Rapturous Reviews Across The Board 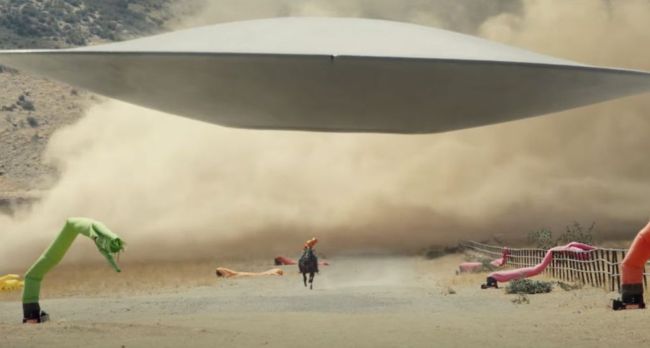 Critics and journalists have finally seen NOPE, the third film from acclaimed director Jordan Peele, as the initial response to the movie seems to be overwhelmingly positive, with Peele getting compared to the likes of Steven Spielberg and John Carpenter.

Not going to spoil any aspect of @JordanPeele's #NopeMovie except to say *big* thumbs up.

And cinematographer Hoyte Van Hoytema shot the movie using @IMAX cameras so if you're going to see #Nope see it in IMAX. Hoytema previously shot 'Tenet,' 'Dunkirk,' and 'Interstellar.' pic.twitter.com/92z9udtRMT

NOPE is out of this world. A monster mash with great performances (esp. Kaluuya) and a 50s sci-fi invasion motif. A spectacle about the horrors of spectacles.

Jordan Peele has been compared to Hitchcock, but NOPE shows he’s a next-gen Carpenter. Enjoy the show and don’t look up. pic.twitter.com/dGKwbXg0WF

#NopeMovie is a resounding YES. See it on the biggest screen you can find. A thrilling and strange spectacle unlike anything else out there. I'll never look at the sky the same way again.

So #NopeMovie is absolutely phenomenal in so many ways. Perfectly blends together a sci-fi spectacle w/a story that is also something of a Hollywood reckoning & it blew my expectations away. Gorgeously shot, the sound mix is thunderous & the cast all shines. Love love loved it. pic.twitter.com/qdcZIvsX5T

Not sure how y'all can come up with such a quick reaction to #NopeMovie. I'm still in my head about it.

#NOPEMovie isn't what you expect and the trailer doesn't give it justice.

Jordan Peele does the unimaginable — again.

RUN, DON'T WALK TO SEE IT THIS WEEKEND.

GIVE KEKE PALMER ALL THE AWARDS CONSIDERATION THIS YEAR.

The most important thing you need to know about NOPE is it’s crazy different from Get Out & Us. This is Jordan Peele spreading his wings and making big budget Spielberg/esque sci-fi, but with the subtext you’d expect. Enter with an open mind and you’ll be rewarded. #NopeMovie

I’m gonna have to sit with this one again cause I am still processing what the hell I just watched. #NopeMovie #NopeNight pic.twitter.com/Ac6aYJjdQr

I got to watch #NopeMovie early, and it was a truly wild moment from start to finish. Jordan Peele really had me in that theater just stressed all the way until the end credits!! pic.twitter.com/OPE96hDUNH

#NopeMovie is an absolute blast!! @JordanPeele has crafted a loving homage to fans of a certain Spielberg masterpiece – I’ll let you figure that out. The cast is excellent and the sound and set designs are impeccable! Full review @joblocom very soon! This is a wild ride!

Here is the vague yet tantalizing official synopsis of the film, via Universal Pictures:

Caretakers at a California horse ranch encounter a mysterious force that affects human and animal behaviour.

Key & Peele alongside actor Keegan Michael Key, previously directed the Best Picture-nominated Get Out in 2017 and Us in 2019. According to critics who have seen the movie, NOPE represents a significant step-up in scope (rhyme intended) for the beloved 43-year-old filmmaker.

Nope, which stars recent Oscar winner Daniel Kaluuya, Keke Palmer, and Steven Yeun, will hit theaters in the United States on Friday, July 22. Academy Award nominee Jesse Plemons was originally set to star in the film but had to drop out due to scheduling conflicts, so he was ultimately by fellow Oscar nominee Steve Yeun of The Walking Dead and Minari fame.