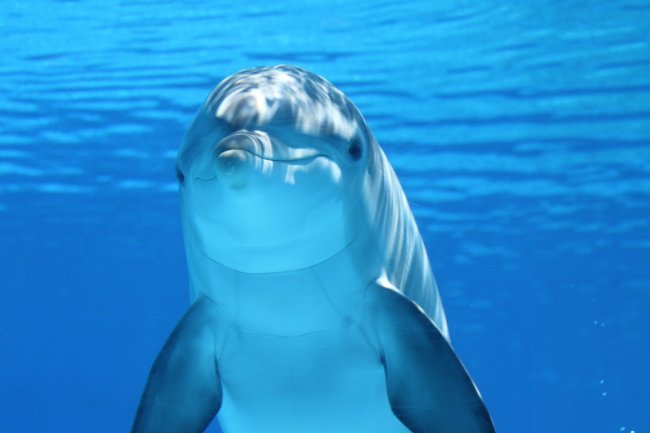 ‘Military Dolphins’ feels like a story that comes around every couple of years in different forms. I had to check the archives on this one because I got the sense I’d written about it before and I found this article from 5 years ago here on BroBible where a former Navy SEAL sniper discussed ‘combat dolphins’ trained to headbutt enemies with deadly gas needles.

According to recent evidence, it appears as if North Korea is trying to follow in the footsteps of the United States by militarizing dolphins. Russia has also gotten in on the elite military dolphin game with bases in the Black Sea and the Arctic.

This report on North Korea comes from the non-profit United States Naval Institute which has obtained photographs of dolphin pens adjacent to military bases, presumably for militarizing these porpoises:

Based on image intelligence, North Korea’s program dates back at least to October 2015. Their first appearance was at the site of a major naval display in Nampo, a naval base and port city on the west coast. The program is likely part of the widespread modernization of the navy that has taken place under North Korean leader Kim Jong Un.

The animal pens were spotted in satellite imagery in the brown waters between a shipyard and a coal loading pier. This location may still be in use intermittently, possibly for training with the naval units based nearby. But the main activity moved to a site further up the river on the edge of town. This base, possibly where the dolphins are bred, began its development in October 2016.

The U.S. Navy and Russian Navy programs provide a good frame of reference. In America, dolphins and sea lions have been trained. Russia uses Beluga whales, dolphins and seals. The U.S. Navy has deployed them in Vietnam and the Persian Gulf. More recently, Russia may have deployed them to the war in Syria. The Beluga whale that turned up in Norway was likely part of the Russian Navy program. What it was doing off the Norwegian coast is open to discussion.

Dolphins could, in theory, be used in interesting ways. Former Navy SEAL Brandon Webb wrote in his memoir about dolphins that were trained to track divers down and headbutt them with a gas needle which would then create a deadly embolism.

The USNI report states that it’s possible that some of these pens are fish farms but these particular pens are different from known fish farms in North Korea and suggest that they’re likely for military dolphins. It goes on to mention a few possible uses for militarized marine mammals:

Marine mammals can be trained to locate or pick up objects on the sea floor, such as mines or expended training torpedoes. The same skills can be used to inspect objects on the seabed, like cables and sonar arrays. If these are friendly, then it is useful for maintenance.

Marine mammals can also be used to defend naval bases against saboteurs. They can also be trained to detect enemy divers and mark them for investigation and neutralization. Human swimmers cannot compete with dolphins or seals in speed, agility, and the natural ability to ‘see’ in dark or murky water. It’s not a contest, but because they cannot identify whether the diver is a friend or foe, they would only be used to mark the target by attaching a buoy. This is also more practical for training purposes. Enemy divers can then be dealt with by grenades or nets with shark hooks. (via USNI)

I’ve heard some interesting stories about surfing in North Korea which was once tapped as the ‘next great surfing destination‘ in the world but after reading about the potential for deadly porpoise attacks in murky water I think we’re all best off avoiding going swimming in North Korea.

An article in the Post notes that North Korea also trains dolphins for an aquarium in the capital city but the intertwining of the military and everything else in the country means there’s no reason to believe these aren’t straight-up military dolphins.