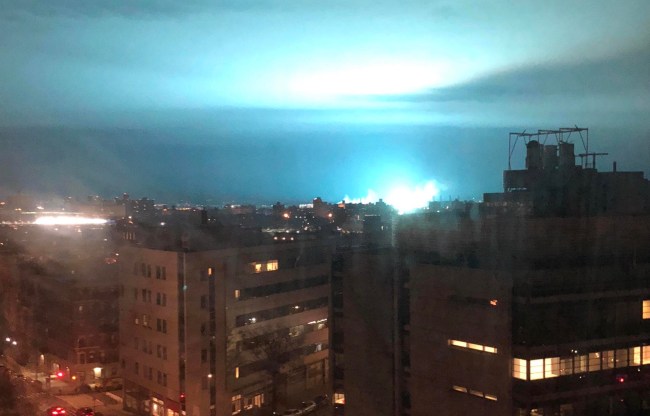 There aren’t many things in life more unsettling that minding your own business when you suddenly get a text from someone out of the blue frantically asking if you’re OK.

This was exactly what happened to me last night while I was watching a Hallmark Christmas movie I’d DVRed before the holiday but hadn’t had a chance to watch.

Just around the time the main character realized she might actually feel more at home in her childhood town than the big city, my phone started blowing up and I got multiple pictures and videos of a giant blue light flashing in the sky over Queens in New York City.

This was the sky in Astoria tonight. Lights rapidly flickered on and off. Then an icy blue sky. LOTS of sirens going off right now. pic.twitter.com/eTdmfwH5og

No one seemed to know what the hell was going on so I turned to the contingency plan I’ve established for the apocalypse: drinking as much as possible before the world ends.

I didn’t even bother pouring the whiskey out of the bottle as I sifted through Twitter trying to figure out what the hell was going on but there was initially no clear consensus.

I eventually discovered the official explanation was that a transformer exploded at a power plant in Astoria.

However, plenty of people had already come to the conclusion that aliens had finally arrived.

Aliens have arrived in #nyc pic.twitter.com/2wbvTzXOHh

everyone in New York right now, staring out their windows because they've clearly forgotten the plot of Independence Day pic.twitter.com/z9B12B4SP8

before the US government shuts me up, aliens have landed in NYC pic.twitter.com/6e819jHSyo

#Bluelight #NYC Are we under alien attack? pic.twitter.com/lMZIGKFPjZ

Other people thought the scene more closely resembled something out of Ghostbusters.

We just found out what Twitter would have looked like if the Ghostbusters movies happened in real life.

The New York sky tonight confirming there is no Dana only Zuul #ghostbusters pic.twitter.com/ceEu6m9ATa

Someone, call the Ghostbusters. #Astoria pic.twitter.com/HhU1wcfKjh

Things were eventually brought under control, and shockingly, no one was injured in a blast that proved there’s basically nothing that’s capable of phasing New Yorkers (or anyone else in 2018).

Folks on twitter reacting without surprise to the prospect of an alien invasion in NYC is peak 2018.