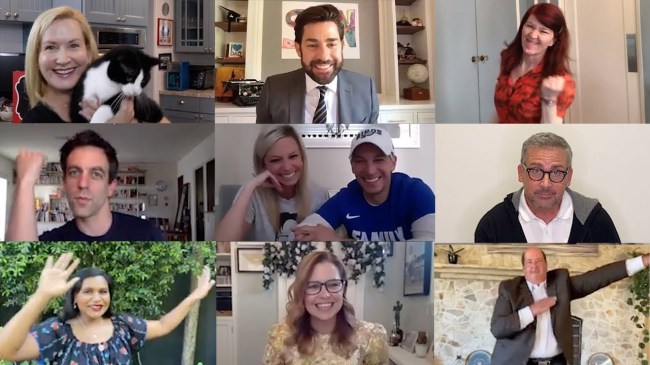 Well, it wasn’t exactly what all the show’s fans had in mind, but The Office cast did reunite briefly over the weekend for a Zoom wedding with John Krasinski officiating on his Some Good News YouTube show.

And when I say The Office cast, I mean almost the entire cast got back together. In addition to Krasinski we got to see Jenna Fischer, Rainn Wilson, Angela Kinsey, Ed Helms, Mindy Kaling, B.J. Novak, Kate Flannery, Oscar Nunez, Phyllis Smith, Creed Bratton, Brian Baumgartner, and yes, Steve Carell.

How this reunion of The Office came to be was because a couple of fans, John and Susan, asked Krasinski to officiate their wedding (he recently got ordained) after John proposed to Susan outside of, you guessed it, a gas station.

So, without John and Susan’s knowledge, Krasinski not only got in touch with both of their parents, their best friends, as well as several “guests” including not only The Office cast, but also the couple’s favorite musician Zac Brown to play the music for Susan’s walk down the aisle.

Oh yeah, Krasinski’s wife Emily Blunt also appeared on this episode of the show, as did Emma Stone, who provided the weather report.

“Perhaps my favourite love story of the week was a couple down in Maryland, whose wedding proposal was oddly familiar,” Krasinski said before showing a clip of his and Fischer’s famous wedding scene.

Of course, no Office wedding would be complete without everyone in the cast dancing to Chris Brown’s “Forever.”