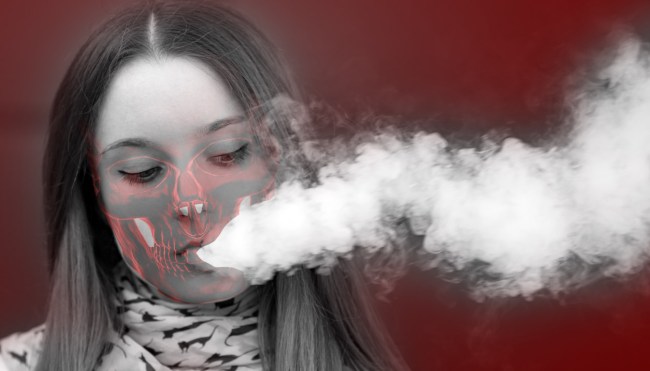 Health officials at the Centers For Disease Control (CDC) have revealed 77 percent of the 805 Americans who have presented with vaping-related illnesses since last summer used THC-containing products.

What is still unclear is whether THC is the root cause of this outbreak of illness in users of e-cigarettes or if there is some other substance that is being added to the THC that is to blame.

“The outbreak currently is pointing to a greater concern around THC-containing products,” said the the principal deputy director of the CDC Dr. Anne Schuchat.

According to The Associated Press…

So far, investigators have not identified a particular electronic cigarette, vaping device, liquid or ingredient behind the outbreak. But officials say patients have mentioned the name Dank Vapes most frequently. Many of the people who got sick in Illinois and Wisconsin said they used prefilled THC cartridges sold in Dank Vapes packaging.

“It’s a generic product name that doesn’t really tie back to one store or one distributor,” said Dr. Jennifer Layden, chief medical officer for the Illinois Department of Public Health.

One of the main problems these health agencies are facing is the fact that in Illinois and Wisconsin alone, patients have reported vaping a combined 87 different product names.

The CDC is still recommending Americans cease their use of all vaping products, “particularly those containing THC,” until the specific cause of the lung illnesses in over 800 people, and 13 deaths, can be pinpointed.

Last week, Canadian officials confirmed they had now seen their first case, so there is concern for the outbreak spreading as those who sell these black market vapes attempt to find new customers.

This latest CDC report also revealed that the median age for people affected by these lung-related illnesses is 23, but the median age of those who have died as a result is 50.

A recent laboratory test commissioned by NBC News revealed that all 10 of the unregulated THC cartridges they had analyzed contained contained myclobutanil, a fungicide that can transform into hydrogen cyanide when burned.

Another recent CDC report that stated a rare form of pneumonia is among the hundreds of vaping-related lung illnesses in the U.S.

The Trump Administration announced on Sept. 11 that it will officially be moving forward with a proposed ban on flavored vaping products, which have also been linked to the outbreak.