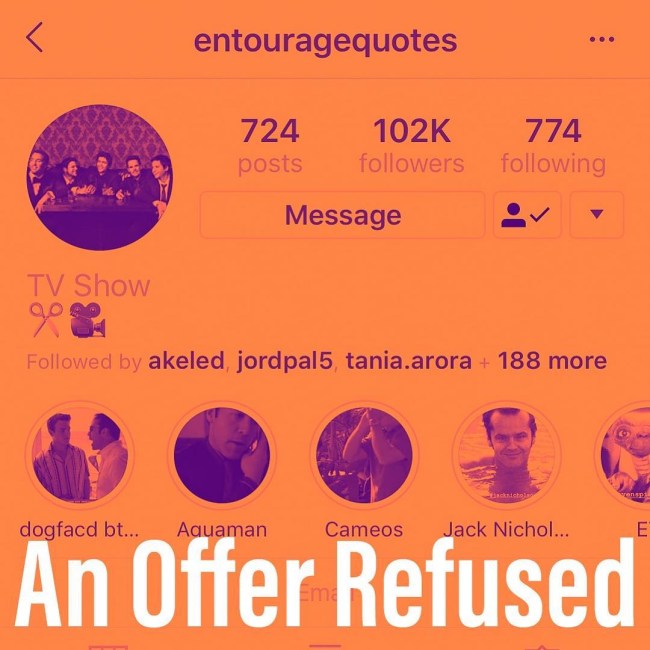 For the best Entourage video content on the Internet, look no further than the entouragequotes Instagram account. It’s run by Anthony, another Cali bro like myself who grew up on the show and rewatches it obsessively. He joined me this week on Oh Yeah, Oh Yeah: The Entourage Podcast  to discuss Episode 4 of Season 2, the highly underrated An Offer Refused.

The highly underrated ‘An Offer Refused’ is live with Anthony aka https://t.co/VNUCHgr32V

2 x all time @jeremypiven rants in this one 🗣🔥

First, we find that Queens Boulevard got into Sundance, Billy Walsh’s second movie in a row to accomplish the feat. Next, Josh Weinstein spills the beans that Aquaman landed a whale of a director in James Cameron. Two moments in young movie star Vincent Chase’s career that catapult him into the upper echelon of Hollywood.  While Vinnie was on the fence last week about accepting the superhero movie role, he and the squad are now pumped to be making a James Cameron movie.

We also have a top-10 Ari Gold moment and rant that comes in two parts. First when he’s with Mrs. Ari in therapy and later when he fires “Peter Cole”.

Also, if you missed it, last week we had fun with actor Jerry Ferrara on Twitter comparing our favorite Entourage characters to NBA logos.

Spoiler alert, they were all Turtle.